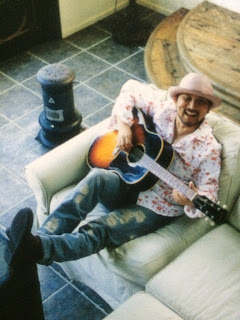 With the recent spate of popular non-enka/kayokyoku singers from the 70's to the 90's appearing on "Uta Kon", it got me eager to see who's gonna be the next "special guest", so to speak, on the next week. While most of my hopes lied in Hiroshi Tachi and Anzen Chitai/Koji Tamaki - Southern All Stars is too wild for "Uta Kon" - I had (sadly) forgotten about this one fellow whom had once been a favourite of mine until I saw the lineup for this week on the "Uta Kon" homepage.

I was extremely pleased to see Chage as one of the guests. I really did not expect him to be on this show. I had waited way too long to see him on TV! And man, I couldn't help but smile when seeing those familiar shades and hat this evening. I wouldn't say I was emotional, but it felt like I had been reunited with an old friend. However, as happy as I was, it felt bittersweet. Not because he only sang one song, but... ... It would have been twice as great if the other half of the duo were present. Oh, well.


Moving on, while I generally listen to ASKA's solo works often, I do occasionally tune in to what Chage has to offer. And I have to say that their musical styles are quite differing, with Chage putting out stuff that are usually more edgy and rock-centric (from what I know). One such song that I feel shows this edgy side is "Tokyo Tower", with a laid-back pace accompanied by the sharp electric guitar wailing behind the strumming of the acoustic guitar. As for the the singer-songwriter's lyrics, I'm not entirely sure about it's meaning, but it seems that the main character wants to bring his love to the iconic red structure. I haven't been up the Tokyo Tower, but I wonder if the view is similar to what I saw from this tall building in Shinjuku (can't remember what it's called).

Ah, "Tokyo Tower" reminds me of the times when I had to take the bus home back during my first couple of years in secondary school (grades 7-8). The melody really went well with the cityscape whizzing by below a somewhat overcast sky.


"Tokyo Tower" was released on 30th September 1998 as Chage's first solo single. I'm not sure how well it did on the charts, but the album containing the track, "2nd", released on 21st October of the same year, managed to peak at 15th place on the Oricon weeklies. In 2009, Chage did a self-cover of "Tokyo Tower" in the album "Many Happy Returns", which came in at 22nd place on the Oricon weeklies. The picture at the start of the article is from "Many Happy Returns", by the way.
Posted by Noelle Tham at 9:36 AM