Need to wind down a bit after that last episode of "Gotham"...things are starting to wind up for the end of another season.

After writing that last article on Ikue Sakakibara's（榊原郁恵）"Arrangement" which was composed by Shogo Hamada（浜田省吾）, I managed to come across one of his own songs on YouTube called "Asa no Silhouette" (Morning Silhouette). Written and composed by the man himself, this was originally a track on his 4th official album "Mind Screen" from May 1979. Against the backdrop of some mellow horns and morning-appropriate keyboards, Hamada waxes philosophical about love as the hero of the story muses about the end of a one-night tryst while nursing a gin hangover. I'm not sure how it will end although the music hints that if there is a separation between the two partners, then it will probably be sad but amicable. Just hope the breakfast is good.


Hamada re-visited "Asa no Silhouette" for his album of ballads "Sand Castle" in December 1983. No horns in this version but the arrangement still has that breezy feeling...perhaps this time, the setting is at a resort hotel rather than the more urban accommodations in the original version. This album did far better by hitting No. 6 on the charts. 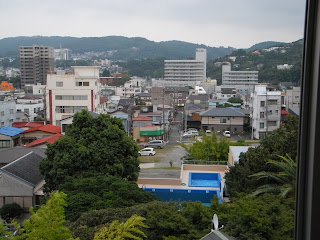