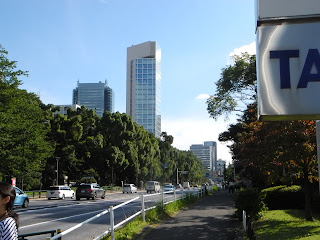 I do believe the above is a photo of Shiba Park near the Tokyo Prince Hotel. Nice sunny blue sky out there.


Found out another happy pop song from the Ritsuko Kurosawa（黒沢律子）vault recently called "Blue Sky". I would also call it one of my naruhodo (Oh, I see!) songs, too. It's about a woman who has probably decided to go on with her life after a breakup, starting by forgiving her erstwhile boyfriend. Can't mourn forever, after all.

The naruhodo part comes with the folks who created "Blue Sky" for Kurosawa. It turns out that they are Chikuzen Sato and Chiaki Fujita（佐藤竹善・藤田千章）from Sing Like Talking, one of my favourite bands in Japan. Although admittedly I wouldn't have pegged those guys as the songwriters from just listening to it at first, as soon as I saw their names in kanji, I did do my "Oh, I see!" declaration due to the irresistible pop hook which has a bit of light funk and a bit of rock guitar near the end. SLT could have easily covered it (maybe they have) and in fact, I can hear Sato somewhere in the background.