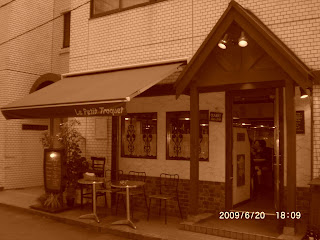 Le Petit Troquet is a French restaurant where my former colleagues and I had dinner one time well over a decade ago, as you can see from the time stamp at the bottom right. Even looking up the place on Yahoo.jp (not far away from Shibuya Station in Tokyo), I'm not sure whether the place is still in business. I hear that restaurants and bars can open and close more frequently than a goldfish's mouth in the big city.

To be honest, I don't remember what I had at Le Petit Troquet but I'm pretty sure that I didn't imbibe on the hard stuff like whiskey or brandy. And sipping whiskey is what I would compare this song to (what a segue!). Of course, I mean that in a good way with Kumiko Sawada's（沢田久美子）"Iro no Nai Sekai" (Colourless World), the opening track from her album "Love Me Or Leave Me" from 1979.

In May 2019, I introduced singer-songwriter Sawada with one of the other tracks on "Love Me Or Leave Me", "Your Love's Away", a disco-funk song perhaps inspired by Cheryl Lynn. Fascinatingly enough, "Iro no Nai Sekai" is a mellow and bluesy slab of sunset City Pop that I thought would be one of the later tracks with "Your Love's Away" being the starter of the album. Instead, this creation by Sawada opens up a relaxing respite at home or at the local bar after a busy week at the company. Nursing a whiskey would be just the thing while listening to "Iro no Nai Sekai", especially when the sax solo rolls in.

As I mentioned in that 2019 article for Sawada, there's very little information on the singer but I did find out at Discogs that she did end up releasing one single, "Imagination", which included "Your Love's Away" as the B-side in 1979. But that's all I can find.