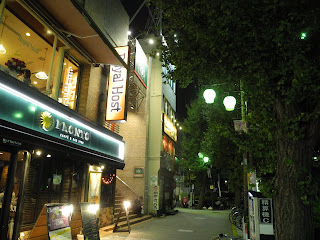 Just a pleasant night shot of the area outside of the R&B Hotel at Otsuka Station in Tokyo when I first got back to the big city in November 2017. Didn't patronize Pronto but I did visit Royal Host a few times during my two-week stay.

I found a track from Masahiko "Matchy" Kondo's（近藤真彦）5th studio album "Winning" (no idea if Charlie Sheen has anything to do with this) which came out on New Year's Day 1984. "Tokyo Night" has that City Pop beat in there and it's characterized by that loopy guitar from the intro which reminds me of Julio Iglesias' version of "Begin The Beguine". Written by Shigeru Sato（佐藤茂）and composed by Koji Makaino（馬飼野康二）, the latter person took care of the arrangement for all of the tracks on "Winning", and looking at the very brief J-Wiki article on the album, it appears that a fair number of City Pop-familiar songwriters were contributing their wares such as Fujimal Yoshino（芳野藤丸）, Kingo Hamada（濱田金吾）and Chinfa Kan（康珍化）. There are some City Pop-sounding track titles as well.

Never thought I would say this but from looking at the contents of "Winning", I may be interested in getting it which would be the first time that I ever said this for a Matchy album.