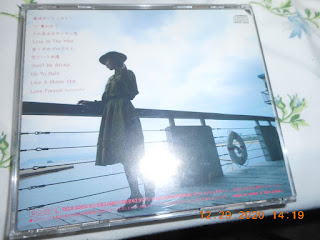 Just from my last article on singer/songwriter and musician, Kaori Kuno（久野かおり）, and the topic of this song, I really have to see if I can get my hands on any of her earliest albums before the 1990s came along.

Case in point is "Just Only Tonight", a track from her 1989 "Sincere" album. My last article on her was featuring "Adam & Eve 1989", a Matt Bianco-like sophisti-pop tune. With "Just Only Tonight", which was written and composed by Kuno, it's more of a mixture of straight-up upbeat pop and late 1980s/early 1990s City Pop, and the overall arrangement reminds me of the material of Junichi Inagaki（稲垣潤一）. It's quite the speedy song as well as if folks in the tune were painting the town red at whirlwind speed. Considering that it was still the Bubble Era (perhaps), I shouldn't be surprised. By the way, keyboardist Tadashi Nanba（難波正司）from T-Square arranged the song.