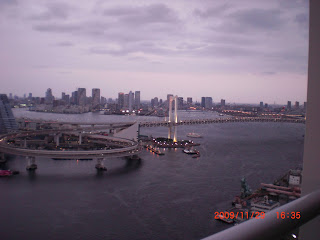 Ahh, yes. A sunset view from a friend's apartment overlooking Tokyo Bay and the Rainbow Bridge. Indeed I enjoyed my sojourns into the bay area including Odaiba.

It's just the opportunity to put up another cool and soulful number by the duo paris match. May I also add groovy to this track "Tokyo Bay" from their 6th album "After Six" from March 2006? With the album title and track title, one would think that "Tokyo Bay" is about getting ready for a grand Friday night in the megalopolis. Certainly, from paris match composer and arranger Yosuke Sugiyama's（杉山洋介）melody, the feeling would be the anticipation of getting all gussied up to paint the town red.

However, former paris match member and current associate Tai Furusawa's（古澤大）lyrics actually relate someone sitting on the bench right by the titular bay taking a measure of the past, present and future following a romantic breakup. But the way things are progressing in the song, it appears that everything will be OK and tomorrow will be another day. So we have some upbeat groove paired with some contemplation delivered reassuring by the velvet tones of Mari Mizuno（ミズノマリ）. 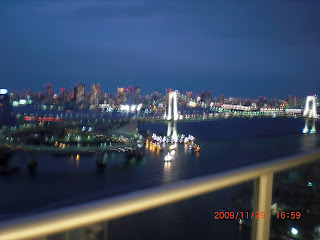