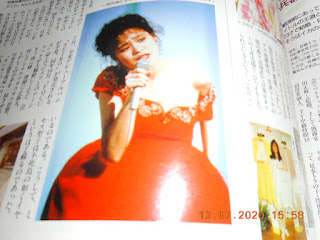 At the beginning of the 1980s, Seiko Matsuda（松田聖子）was making her first strides to become the Queen Aidoru of the early 1980s. By the end of that decade, though, after getting married and having a daughter and then coming back onto the music scene, she was also blurring the line between teenybopper singer and pop star.

Personally, I'm always going to have a sweet spot for the early Seiko and her hits such as "Akai Sweet Pea" (赤いスイートピー）and "Aoi Sangoshou"（青い珊瑚礁）. Having said that, though, I'm also going to be curious about some of those songs that she released in the late 1980s and beyond. Case in point: her 27th single "Precious Heart" which was released in November 1989. By that time, I was comfortably within my JET life in Gunma Prefecture but I don't remember much about any television hoopla surrounding the single. I think that I probably remarked something along the lines of "Oh, that's Seiko. She's still putting out music, I see...".

But I do remember this commercial that was using "Precious Heart" as the campaign song. I would have thought that something as cheerful and dynamic as this particular single had been the theme tune for one of the dramas of the time. Actually, though, it was promoting Subaru's Rex ai which I guess is pretty nice music for a car. Plus, the ad has that more mature visage of Seiko.

"Precious Heart" also had that touch of happy pop/rock so when I read that Kaori Okui（奥居香）, lead vocalist of the really popular band Princess Princess（プリンセスプリンセス）, had come up with the music for Matsuda's own lyrics, I did go "Ah, naruhodo". The song does have that PuriPuri vibe. It also garnered a No. 2 ranking on the Oricon weeklies as it was placed on Seiko-chan's 16th original album, "Precious Moment", from December 1989. It peaked at No. 6 on the Oricon album chart.