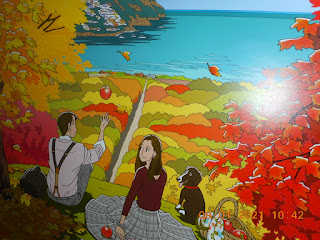 I do love my Seizo Watase calendar and suitably enough, I've got the autumn look up here.

Yes, now that we are in the colourful season, trees especially up north of us are changing into their orange and golden hues. Furthermore, when it comes to the autumn and Japanese popular music, my mind always travels to Off-Course（オフコース）since their classic and rich "Aki no Kehai"（秋の気配）from 1977 is not only the first song by the band to grace the pages of "Kayo Kyoku Plus", it is also the first song by the band that I had ever heard all the way back in the early 1980s, thanks to the "Sounds of Japan" radio show.

Somewhere on my shelves, I have a compilation album for Off-Course that's dedicated to their more autumn-themed creations, and that's where I probably heard this other just-as-bittersweet but just-as-lovely song, "Aki Yuku Machi de" (In An Autumn Town) by Kazumasa Oda（小田和正）. It was the title track for the band's very first live album "Aki Yuku Machi de/Off-Course Live In Concert"（秋ゆく街で ⁄ オフ・コース・ライヴ・イン・コンサート） which was released in December 1974.  If anything, "Aki Yuku Machi de" sounds even lusher than "Aki no Kehai", and I think it may be the first song with a male vocalist (Oda himself) that I could consider to be an example of Fashion Music or Japanese Baroque Pop, thanks to the string-and-piano arrangement. Up to this point, the examples of Fashion Music that I'd encountered were all vocalized by women.

Next to his beautiful music, Oda's lyrics relate the tale of a couple in a not-so-clear situation but hints that they will have to separate very soon. Parting is such sweet sorrow, indeed. Moreover, to put a very definite round period on "Aki Yuku Machi de", the coda consists of the strings suddenly going into an ominous minor key. I don't want to think what is to come of this relationship.

The live album was recorded on October 26th 1974 during a concert at Nakano Sun Plaza in Tokyo. I've never had the opportunity to enter the place but since I visited the geek paradise of Nakano Broadway frequently, I used to see Nakano Sun Plaza all the time off to the side when I left Nakano Station on the Tozai Line. From the J-Wiki article for "Aki Yuku Machi de/Off-Course Live In Concert", it seems rather interesting since on Side A, there is a massive medley within 6 minutes of famous pop songs from the West including Elton John's "Your Song" and Gilbert O'Sullivan's "Alone Again (Naturally)" before going into the Off-Course stuff near the end and then throughout Side B.