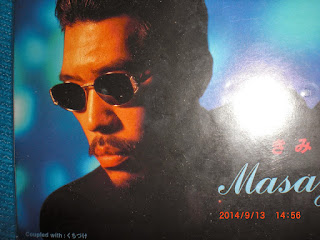 And welcome to another sunny Sunday edition of "Kayo Kyoku Plus". The age of 60 is an important one in Japan since the birthday is known as kanreki, a sign that one has gone through the Chinese zodiac five times and is seen as a rebirth for the individual. Still, like in Canada, Japan's Old Age Pension clicks in from 65 years of age.
Well, guess who turned 65 on September 22nd? It was none other than the King of Love Songs, the Count of Charisma and the Sultan of Soul in Japan himself (the last two titles are mine alone), Masayuki "Martin" Suzuki（鈴木雅之）. Yup, this guy is now technically a senior citizen! This is a fellow who can probably dance orbits around me (and considering my girth, the vocabulary is accurate here) and he's now able to pick up his OAP cheques.
While we "Kaguya-sama" anime fans wait for a third season next year and therefore, hopefully, another Martin opening theme extravaganza, allow me to introduce another track onto the blog from his April 1988 album, "Radio Days", to join "Misty Mauve" and "Hohoemi wo Machi nagara"（微笑みを待ちながら）among others. "Tandem Run" will have new fans of Martin swooning with its cool and upbeat soulfulness and some of that city-zipping sophisti-pop feeling.
Keyboardist Hiroshi Sato（佐藤博）was responsible for the music and arrangement while Yui Masaki（真沙木唯）came up with the lyrics about a fellow giving his goodbyes to a woman and a relationship after a great run in the city via a car (I'm assuming nothing less than a sporty version of Audi would have sufficed here). Just from the description, the guy seems like a blasé Humphrey Bogart type who has acknowledged the good times but when it's time to say adios, it's time to say adios (although it's uncertain who initiated the breakup). The only couple that really stays is Bogie and his Audi. Somewhat cold, but dang, I love the music by melody magician Sato.
Posted by J-Canuck at 1:34 PM