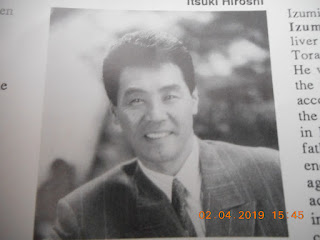 I was looking through the Showa Pops list for one of the months in June 1976 to research for a recent ROY article when I came across "Kita Sakaba" (Northern Bars). For myself and others of the kayo persuasion, the song has always referred to that jaunty 1982 classic by enka veteran Takashi Hosokawa（細川たかし）.
So why was I seeing that title in 1976 and why was it being sung by fellow enka singer Hiroshi Itsuki（五木ひろし）? Well, that got my curiosity going. By chance, was I going to get my mind whirled around with a potential revelation that Hosokawa's hit had been a cover version all along?
No worries. My world is still intact. It just happens that although the title is indeed the same, that's the only thing that connects Hosokawa's "Kita Sakaba" with Itsuki's "Kita Sakaba". They are totally different songs. According to J-Wiki, the latter tune was released as Itsuki's 22nd single in June 1976, and was written by Osamu Yoshioka（吉岡治）whose lyrics are quite different from Hosokawa's story of living life large on a bar-lined avenue up north. Actually, Yoshioka's words tell the tale of two lonely ships passing in the night, so to speak, in a rickety old nomiya up north where the snow manages to trickle in despite the doors being closed.
Nobuyasu Okabayashi（岡林信康）, the man behind the melody, is someone that I mentioned just last Friday for the late Rabi Nakayama's（中山ラビ）"Komatta Onna"（困った女）. He was called the Bob Dylan of Japan for his folk music and in the J-Wiki article for Itsuki's "Kita Sakaba", he's also been dubbed as the God of Folk. And although the song has been classified as an enka tune, there is indeed a strong folk presence in the music that is quite cheerful...even whimsical, perhaps hinting that the two customers in that northern bar might be able to create some happiness together thanks to their fateful encounter. J-Wiki also comments that this was Itsuki's first foray into a folksy tune which earned a No. 13 ranking on Oricon and over 150,000 records sold.
Posted by J-Canuck at 4:17 PM