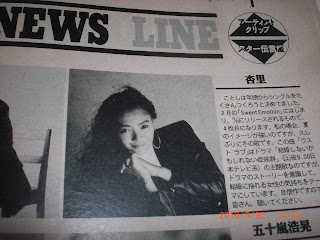 It looks like it's the Sato-and-Masaki day today. I've just finished the article on Masayuki Suzuki's（鈴木雅之）"Tandem Run" which was written and composed by Yui Masaki（真沙木唯）and Hiroshi Sato（佐藤博）respectively, and while I was in the middle of finding out the basic information about that song, I found a brief report on Masaki's creations. The first song at the top of the list was "Honeymoon Shuttle" by Anri（杏里）.

Now, as for those Martin fans who have just read about "Tandem Run", I did have to give belated birthday greetings, but I was much better with Anri since I did give those right on her birthday on August 31st via the article for her "Namida wo Umi ni Kaeshitai"（涙を海に返したい）. Anyways, as I mentioned off the top, it's indeed a Sato-and-Masaki day since the two of them had also been behind this dreamy Anri song "Honeymoon Shuttle" from her 1986 album "Mystique". The kanji which could be read as "Mitsugetsu Sen" or "Mitsugetsu Bune" is always sung as "honeymoon shuttle"  by the singer.

However, the reason that I chose to write about this Sato-and-Masaki-penned number immediately after a Sato-and-Masaki-penned one for Martin is not because of the commonality in songwriters. It was actually because "Honeymoon Shuttle" isn't only another lovely Anri tune but it also sounds quite different in my estimation when compared to the songs that she was recording during that decade with folks like Toshiki Kadomatsu（角松敏生）. Even its trackmate on "Mystique", "Morning Squall"（モーニング スコール）, has some of that Kadomatsu feeling although the composer and arranger are different.

Actually, "Honeymoon Shuttle" is a romantic Latin-tinged song that sounds so Sato. In fact, I think that if it hadn't been for Wendy Matthews living large on his amazing "Awakening" album, Anri and "Honeymoon Shuttle" could have fit right in as a track there. Sato and Masaki created "Tandem Run" to fit the Martin style but for this Anri tune, it was the other way around. Incidentally, regarding the lyrics, I thought that the narrative was a happy one but then by the end, I realized that despite the honeymoon nature of the music, there was that cold and musty smell of breakup. I'm not sure why the word "honeymoon" was even included except to further dig the toothpicks under the fingernails to stress the message that what could have been didn't happen. I guess Masaki and Sato were in their own Blue period at the time.