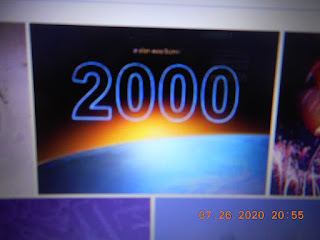 When I was a kid, I had once thought that cartoons were supposed to be shown just in the mornings or afternoons, and that included "The Flintstones", not knowing at the time that the adventures of Fred and Barney and all the gang in Bedrock had actually started out as a prime-time evening show; in fact, it was the first prime-time animated program on television, according to Wikipedia.

However, I think with the success and obvious longevity of "The Simpsons", new cartoons with a subversive and irreverent streak began to pop up in the evening slots, and in some cases, the post-prime-time slots because some of the jokes were a little bluer than blue. Of course, there is another long-lived series "South Park" and then there were the truly out-there antics of "The Ren & Stimpy Show". I saw a number of those episodes during that interregnum between Japan stints, including the one that had "Happy Happy Joy Joy".

"The Ren & Stimpy Show" was the cartoon that came to mind when I first came across episodes of "OH! Super Milk-chan"（OH!スーパーミルクチャン）just within the last week. Director Hideyuki Tanaka（田中秀幸）helped bring out the first batch of 10-minute vignettes of this pint-sized toddler superhero with an indifferent attitude toward saving folks in 1998 on Fuji-TV's "Flyer TV" late-night variety block. But then, a couple of years later in 2000, the "OH! Super Milk-chan" half-hour episodes were broadcast on Space Shower TV, WOWOW and other satellite channels, before straight-to-dub and Americanized versions made it onto Cartoon Network in 2004. I'm naturally no expert on "OH! Super Milk-chan" but from what I've seen, though it doesn't have quite the existential shiv of "The Ren & Stimpy Show", it still seems to possess that certain similar weirdness thanks to the animation, the other off-kilter characters, and the babyish delivery from Milk herself, voiced by Haruka Nakamura（中村春香）.

To add to the weirdness, the theme songs are covers of some ol' Showa kayo. For instance, there is the opening theme, "Ohkami nanka Kowakunai" (I'm Not Afraid of Anything Like A Wolf), which was originally by 70s aidoru Mako Ishino（石野真子）in 1978. Nakamura herself sings this in-character as the song takes on a carnival-like technopop arrangement. Meanwhile, the credits themselves are a parody parade of famous scenes of other anime.

Nakamura's website (no J-Wiki or Wiki profile) is somewhat sparse on the information although she identifies herself as a voice actress, narrator and singer. Though it's coy there about when and where she was born, another site has stated that Nakamura hails from Hiroshima Prefecture and she was born in 1988.

Unlike his co-star, Nagashima, who was born Shigeru Nagashima（長島茂）in Saitama Prefecture in 1957 but now goes by the stage name Chō（チョー）, has both a J-Wiki and a Wikipedia profile.

The American version of "OH! Super Milk-chan" has its own opening theme "Disco Milk" which first alerted me to the existence to the show, and to be honest, I actually like this theme better than the original theme. It's just so catchy with the vocal excerpts from the characters.

All that gets even more ramped up in the ending theme "Sushi Kuite!"（スシ食いてェ! ...I Wanna Eat Sushi!）with the added delight of hearing a sample from an old song that I've known for over 40 years. Unfortunately, I don't know who concocted these themes for the Adult Swim version of "OH! Super Milk-chan".