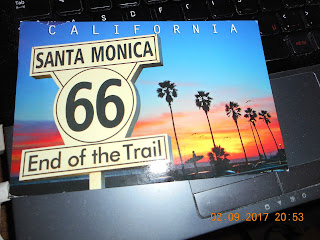 During my usual maintenance duties on the blog, I traipsed into Miho Fujiwara's（藤原美穂）file on "Kayo Kyoku Plus" and noticed that all of her articles thus far involved her presence in Marcos V's "Special Selection Volume II" and the two groups that she was part of: Chocolate Lips and PAZZ. In other words, she didn't have an article all unto herself. Felt somewhat badly about that so it was time for me to rectify this.

And I thought the best thing for me to do was highlight the songs that she contributed to the rather weird anime OVA "California Crisis ~ Tsuigeki no Hibana"（カリフォルニア・クライシス 追撃の銃火...Gun Salvo）. I think that I may have talked with my anime buddy about this 1986 mini-movie before and if I remember correctly, he quickly pooh-poohed it away. Apparently, so did a lot of other people who tried it out.

The article on the site "Cartoon Research" will be a whole lot better on the assessment of what was supposed to be Part 1 of a two-parter anime that was half-road trip and half-science fiction mystery all happening within a fantasized California through rose-coloured Japanese eyes. However the real tragedy is that the production company ran into bankruptcy before a Part 2 could ever be made, leaving things literally incomplete; a cliffhanger that's still hanging. From what I've seen so far is that "California Crisis" is an animated version of an Eizin Suzuki（鈴木英人）painting that was never created by Eizin Suzuki. The scenes were such that I'm sure even Tatsuro Yamashita（山下達郎）was ready to call his legal team before he realized what was going on. For me, though, the one other notable thing is that the crazy California girl Marcia was played by seiyuu Miina Tominaga（富永みーな）who has gone on to take many more roles, including her time as the villainous Majorina in "Smile Precure!"（スマイルプリキュア!）in the early 2010s.

As I mentioned up above, the former vocalist of Chocolate Lips and the future co-vocalist of PAZZ contributed four songs to the anime which were then placed on a release titled "California Crisis" in 1986. If I'm not mistaken, this is probably Fujiwara's first solo project that has been called a maxi-single or a mini-album. Well, since I don't do that many albums compared to the single songs, I'll call this a mini-album for compensation's sake.

Two tracks are on Side A: "Next Move" and "Heartbeat". Both were given lyrics by Fujiwara and music by Matthew Kamei. The whole thing about the anime "California Crisis" is that despite the sparse story and characterization, it was pretty plain that the folks involved were interested in providing their take on life in the Golden State, and listening to "Next Move", there was that feeling of West Coast funk and soundtrack music from a lot of action movies in Hollywood during that time. The other thing is that I have now been reacquainted with the remarkable vocals by Fujiwara although I don't think "Next Move" is the best track on the album.

For those who have been lamenting the fact that they may not be able to get "California Crisis" the mini-album because it's been discontinued, don't lose despair. I say so because the CD version of Chocolate Lips' self-titled album has all four songs from "California Crisis" as bonus tracks, so I've already covered "Heartbeat" there. However, I'm also throwing it in here too for completion's case. There's not much daylight generally between it and "Next Move", melodically speaking, aside from a kittenish voiceover from Fujiwara herself.

My favourite track on the album is "Streets Are Hot" which was created by Fujiwara and her old bandmates from Chocolate Lips, Jimmie L. Weaver and Michael C. Wilson. It also seems to be the most prominent song on the anime since it was played during the presentation of the title card and over the ending credits. Fujiwara gives out her high-toned funk, whispery words and some relatively lower-toned growls which keeps the vocalization interesting. It also helps that the arrangement is gosh-darn catchy as Marcos has mentioned in his article.

The final track is "Eyes" with words by Fujiwara and music by Donald Griffin. The loopy bass is bubbling and there are also some tasty Prince-like guitar licks, and once again, Fujiwara is unleashing some more of her voice. I have to say that I really enjoy Side B better with "Streets Are Hot" and "Eyes" as it feels as if Fujiwara and the band truly settled into their rhythm.