At first, I was going to talk about just one song from this compilation, but someone actually uploaded the full CD on YouTube, which is nice, since a lot of these songs are quite rare. I hope it stays up for a while.

Anyway, this is one of the first CDs from an anime series I remember listening to when I was fifteen or sixteen years old, so I’m very proud to have it in my collection today. At the time, since I was still learning more about Japanese music, this was the image I had of what Japanese music actually sounded like as a whole. Needless to say, I was obviously wrong.

After a while, it became clear that this dated, “awfully” synth-heavy music in an almost late 80s way, was a very specific sound used in theme and image songs by musicians working for the anime industry back in the mid-90s. The crossover between anime music and charts was something relatively new at the time, so I think this was the first time the anime industry thought: “now we have a sound to call ours”. Think of “Neon Genesis Evangelion” (新世紀エヴァンゲリオン), “Slayers” (スレイヤーズ), “Sorcerer Hunters” (爆れつハンター), “Magic Knight Rayearth” (魔法騎士レイアース) and countless other ones, and you will know how this stuff all sounded… and in the middle of them all, there was also “Blue Seed” (碧奇魂ブルーシード).

Based on Yuzo Takada’s (高田裕三) manga of the same name, the “Blue Seed” anime television series aired between 1994 and 1995. In truth, even though I have a close relationship with the soundtrack, I’ve never watched the anime itself. The music is great, though, so let’s talk about my highlights (the album is divided into tracks in the description of the video, so I’ll just point out which song I’ll be talking about).

Released in September 1996, the CD starts off with “Blue Seed’s” opening theme “CARNIVAL BABEL” (“Track 01”) by TAKADA BAND. I usually don’t listen to it as much as I should, since a later cover with a different arrangement sang by Megumi Hayashibara (林原めぐみ) and her main composer/arranger Go Takahashi (たかはしごう) exists, but I like how edgy this original one sounds. As for the TAKADA BAND, even though I don’t know much about them besides the songs featured in this album and their work for the “3x3 EYES” (サザンアイズ) OVA back in 1991~92, I think their energy level is as high as always, which is good. And the arrangement, full of dramatic synth brass sounds, packs a punch as well.

Called “Tsukikage de Mou Ichido” (月影でもう一度), and performed by Sakiko Tamagawa (玉川砂記子), “Track 05” is easily one of my favorites here, even though I agree it’s just a simple pop song driven by a cascade of unashamed synth brass (again) and a bubbly vocal delivery by Tamagawa. The melody is also pretty nice and I still sing the “shiny shiny moon…” pre-chorus every time I listen to it, even after so many years.

Another one of my favorites, “My Sin” (“Track 08”), just exudes sexiness to me. In spite of the song’s title, there’s also something quite alluring about Ai Orikasa’s (折笠愛) vocals that I can’t really grasp. I know that’s very subjective, but I relate them to some cloying yet irresistible smell of incense. Other than that, it’s a long and kind of repetitive song, but I never get tired of it and just love the twinkling synths used in the arrangement.

A late bloomer in my book, Kazuhiko Inoue’s (井上和彦) “RISKY GAME” (“Track 09”) somehow became one of my highlights after many years of pressing the skip button. It took me some time, but nowadays I like Inoue’s “kakkoii” vocals and the overall laidback feel of the song. Besides the on-point twinkling synths, I think Inoue sings it like he doesn’t really care, almost if his hands were inside of the trousers’ pocket while standing aloof in front of the mike. Anyway, I think it’s part of the song’s charm.

“Touch and Go!!” (“Track 15”), which is “Blue Seed's” ending theme, is also the best of the bunch, in my humble opinion. It’s obvious how biased I am, since it’s a song by Megumi Hayashibara, but not only that, it’s also one of my favorites from her entire discography (top ten, for sure). If the overall smooth jazzy vibe and Megumi’s cute yet sexy vocals weren’t enough, when the saxophone subtly climbs its way up during the second chorus, I almost fall in a trance. Add the gentle background harmonies, the cold and ubiquitous string synths, but also the twinkling sounds here and there (a very good characteristic of many of the featured songs here, by the way), and this is as classy as a “Blue Seed” song can sound. 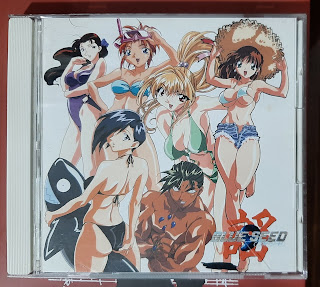