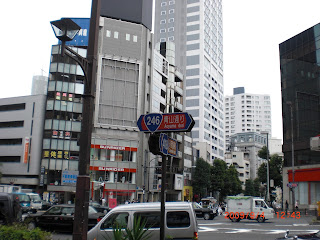 Another season has begun for anime and I've actually been scouting through a few shows already via YouTube.

One show that has got my eye and ear is the manga-adapted "Senpai ga Uzai Kohai no Hanashi"（先輩がうざい後輩の話...My Senpai is Annoying） which is following the recent trend of rom-com anime whose main characters consist of the teased versus the teaser. The earliest example that I know of that is "Karakai Jouzu na Takagi-san"（からかい上手の高木さん...Skilled Teaser Takagi-san） which was set in a junior high school. Since then, I've come across similar shows set in high school and university.

Well with "Senpai ga Uzai", it's gone from the classroom to the boardroom. The teased is Futaba Igarashi（五十嵐双葉）played by Tomori Kusunoki（楠木ともり）, a sales staffer at a trading company who may be short in stature and temper but is tall in spunk. Meanwhile, her senpai teaser is Harumi Takeda（武田晴海）, a huge boisterous lug who has all the smarts and experience of his office but drives Futaba up the wall because he treats her like an elementary school kid. And yet, there are already hints in the first episode that something might be blooming between them.

Kusunoki and Reina Aoyama（青山玲菜）are seiyuu that are new to me but Saori Hayami（早見沙織）and Aoi Koga（古賀葵）are practically old buddies in the anime world. Hayami has been in a number of anime that I've seen over the past decade including "Gochuumon wa Usagi desu ka?"（ご注文はうさぎですか？...Is The Order A Rabbit?）and then there is Koga who is the Kaguya-sama from "Kaguya-sama wa Kokurasetai"（かぐや様をこくらせたい）. But all four of them are involved in the performance of the opening theme song "Annoying! San San Week!". For some reason, the Wikipedia article on the anime hasn't given a translation of "san san"（燦々）but according to Jisho.org, it can mean brilliant or bright, so I can go with "Annoying! Brilliant Week!".

It is pretty catchy and it's just about there as an earworm. I think it can even work as a corporate-themed cheer song, although I'm not sure if it'll be in the karaoke lineup during the year-end parties in Japan (if those are allowed to happen this year...it's looking hopeful, though). Words and music were provided by Junky, songwriter and producer of Vocaloid tunes.