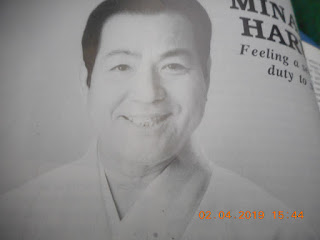 Noelle Tham wrote up the original article on Haruo Minami's（三波春夫）grand "Yuki no Wataridori" but after having listened to Hiroshi Itsuki's（五木ひろし）fine cover of the song recently, I thought that I would also give my two (officially non-existent) Canadian pennies as a follow-up. Moreover, it's now been over 20 years since the beatific presence of Minami left the stage and this mortal coil (July 19, 1923~April 14, 2001), and I have to face the fact that I still miss him whenever New Year's Eve and the annual Kohaku Utagassen appear.

"Yuki no Wataridori" was one of Minami's earliest songs recorded for sale back in 1957 and the other information on the songwriting can be found in Noelle's article. She also talked about what the title is all about and I can say that it can be literally translated as "Migratory Birds in the Snow" but folks might interpret that title as something belonging to a "National Geographic" feature. Wataridori can also colloquially refer to those warriors of the past who can never stay in one place for too long for various reasons such as emotional pain or personal safety. Basically, I think it's all about the masterless samurai or ronin who have to trudge their way throughout all of the seasons including the harsh winter, and what better scene to show the hard life of a ronin than one in which he has to somehow navigate through biting winds and knee-deep snow?

Perhaps what I can add to the narrative that Noelle started is the gusto that Minami added to the vocals for "Yuki no Wataridori" and the proud arrangement that always accompanies the melody by Akira Mutsu (陸奥明). It may seem a bit counter-intuitive to have something sounding this proud for the story of a warrior who has to fight enemies meteorological and human but this isn't anything new for enka and it just goes to show how the display of suffering by one person to reach a goal is apparently greatly appraised by the Japanese. Then, I'd say that it's not surprising that Minami got to perform "Yuki no Wataridori" twice in his many appearances on NHK's Kohaku Utagassen, the first time being his very first time on the program back in 1958 and then in 1979 for his 22nd appearance.

Noelle also mentioned that Hiroshi Itsuki among other enka singers did a cover of "Yuki no Wataridori", and of course has performed it on TV and elsewhere as I stated up above, but his CD version was released in June 2001 according to Tower Records Japan. Itsuki's version doesn't have quite the power that Minami brought to it, but his fans have probably not balked at his take on this tribute to the warrior. I think his performance below has a bit more of that gusto that I was talking about.