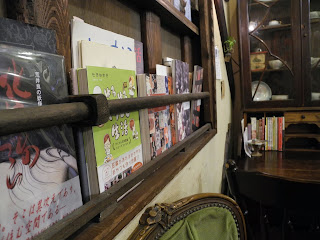 This is something that I've said almost on an annual basis but there are two signs in Japanese pop culture that the end of the year is indeed near: 1) the announcements of the participants in this year's Kohaku Utagassen (may be as early as next week) and 2) the announcements of the nominees for Top Catchphrases and New Words of the Year. The latter was announced earlier today and apparently, the nominees include No. 19 "Sho Time" for Los Angeles Angels phenom Shohei Otani, and No. 23 "TikTok" which I had to look up some minutes ago.


Well, speaking of catchphrases, I want to throw an old and probably not very well-remembered one at you: Fashion Music. Back in the early days of "Kayo Kyoku Plus", I wrote about a singer by the name of Asami Kado（門あさ美）and her song "Fascination". When I looked up the J-Wiki article for her, I found out that the catchphrase that was used by her people to describe her brand of musique was indeed Fashion Music (and not Fashion Pop that I may have erroneously used in other articles...🙏).

According to that article, Fashion Music may have become a brief sub-genre under the New Music banner in the late 1970s and early 1980s to describe an especially refined sort of popular kayo, perhaps somewhat like the sophisticated pop (Manhattan Transfer, Swingout Sister, etc.) of the West. However, although I punched in the katakana for this genre into Yahoo.jp, I got bupkiss so perhaps to all concerned, Fashion Music was more Kado's catchphrase.

However, according to my memories, I think a case can be made that there was indeed Fashion Music featuring female singers for a few years at least around the turn of that decade to accompany the exotic kayo involving chanteuses singing about traveling through foreign countries and of course, the first high point of Japanese urban contemporary via City Pop. But unlike the inclusion of jazzy elements within sophisticated pop, my impression of Fashion Music is that it was distantly akin to the sweet music of American popular music of nearly a century ago as opposed to the "wild and immoral" jazz of the 1920s. Fashion Music is still perhaps not considered to be a true sub-genre, so my examples of what I consider to be part of it have been categorized under different genres ranging from New Music to general Pop, but in terms of sound, there is a certain Old World European feel often involving strings and maybe an accordion. The melody is also very mellow and occasionally melancholy or dramatic. Visually, I think the singer is on a chaise lounge performing the song while reaching for that solitary grape on a tiny wooden table.

But I've written enough for now here. Allow me to give my own examples of Fashion Music.


Well, why not start with the lady who first got the phrase coined? This is one person who I would also automatically picture on that chaise lounge on a balcony in some really ritzy hotel in the south of France. With Asami Kado's "Fascination", there is a tiny hint of bossa nova in there, another easy genre to relax to.

I also mentioned in that article for Kado's "Fascination" that Ruiko Kurahashi（倉橋ルイ子）, one of my favourites, would also make for a fine member in Fashion Music. Her appearances on TV and her album covers have her looking very ennui-laden. The one song that seems to be one of her trademark tunes is "Last Scene ni Ai wo Komete"（ラストシーンに愛をこめて）which seems tailor-made (especially the instrumental bridge) to accompany an Oscar broadcast montage of classic romance scenes (such as the final one between Rick and Ilsa in "Casablanca"). Visually, I can only imagine a night walking along a canal in Venice.


Sweet music, indeed. Chika Ueda's（上田知華）strong vocals and a pop melody from the 1970s that has been given an arrangement dating back 40-50 years earlier really made an impression on me when I first heard it on "Sounds of Japan" decades ago. It's those strings by Karyobin which finally sparked me into writing this article. "Aki Iro Kesho"（秋色化粧）does sound like something that I would like to hear in an old-fashioned cafe while the master is expertly grinding those coffee beans.


Through listening to Mieko Nishijima's（西島三重子）music via "Sounds of Japan" for many years, I've categorized her brand of music as ranging from folk to AOR. As I put it in the original article, "Kamome yori Shiroi Kokoro de"（かもめより白い心で）is a reminder of a walk through sylvan woods in Europe, although perhaps with that titular seagull in the title, maybe Nishijima had meant the setting to be somewhere along the beach.


I could have done without the horns in the "Yoru no Hit Studio"（夜のヒットスタジオ）performance by Mayumi Itsuwa（五輪真弓）, but listening to the original recording of "Sayonara Dake wa Iwanai de"（さよならだけは言わないで）, it almost describes a scene from a 1960s French movie with Alain Delon and Charles Aznavour. It's one of my favourites by Itsuwa, and for other fans, I wouldn't be surprised if they said they had been transported to France.

Considering that I envisaged a trip to an old-style cafe for a couple of these songs, perhaps Fashion Music can also be known as Cafe Kayo. Any of these songs could call for a really finely brewed cup of coffee with a slice of pie or cake. The one word that I have yet to use here, though, is elegance. I guess the common denominator for all of these songs and perhaps songs that I have yet to come across is the elegance within them.
Posted by J-Canuck at 10:09 PM