Although not my overall favorite aidoru (that would be Chisato Moritaka [森高千里]) or singer (and this one is surely Megumi Hayashibara [林原めぐみ]), I believe Naoko Kawai (河合奈保子) had everything in her favor. Besides getting some well-crafted songs from professional songwriters and composers during her early years, she also had the looks and talent to succeed. Always really cute in her aidoru dresses, but sometimes sexy in bikini fashion, later she surprised her audience with the new look of a beautiful and classy mature young woman. On top of that, Naoko Kawai was gifted with true talent and was able to develop a solid singing technique.

After starting a singing career as the typical cute aidoru in the early 80s, Naoko Kawai chased some West Coast trends during the mid-80s with albums such as “Daydream Coast” and “9 ½” (links to part one and two, respectively)… just to finally rediscover Japan around 1986~1987.

In a somewhat bold move, Kawai embraced Japanese traditional elements, mixing them with standard pop structures, while also leaving the obvious Western adaptations behind – in opposition to what her fellow colleagues were doing at the time, voraciously incorporating Western trends into their music. In fact, it was during this rediscover of Japan’s musicality that she released, in June 1987, the beautiful album “JAPAN as waterscapes”, which was followed by the recut single “Izayoi Monogatari” in July.

Just like the big “Half Moon Serenade” (ハーフムーン・セレナーデ) from 1986, “Izayoi Monogatari” is also a dramatic ballad, but this time with some typical Japanese sounds in the arrangement. Now, let’s just put it clear: her embrace of Japanese elements is nor overwhelming, nor really rooted in the country’s traditions, serving more as a stylized Japanese flourishment on top of a more 'universal' foundation. However, based on Kawai’s early image as the cute and smiley aidoru in “Smile For Me” or “Moonlight Kiss”, it’s astonishing how she was able to mature herself and adapt to this type of emotional ballad. It truly showcases her as a professional vocalist, just like “Nanpasen” (難破船) did to Akina Nakamori (中森明菜) around the same time.

“Izayoi Monogatari” reached #10 on the Oricon chart. Lyrics were written by Yumi Yoshimoto (吉元由美), while music was composed by Naoko Kawai herself. As for the arrangement, Ichizo Seo (せお いちぞう) was the responsible. 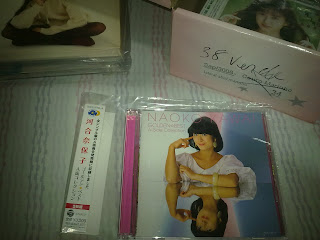