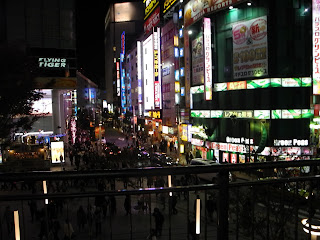 Not sure what the most popular dance emporium was in the early 1980s. I think Juliana's was more in the late 80s or early 90s since it seemed to be the disco of the Bubble Era. Perhaps it was still the Lexington Queen in Roppongi? In any case, as a high school kid, it was still way too early for me.


However, Yoshiyuki Osawa's（大澤誉志幸）distinctive "Slow Dance" gets me thinking of some of those dance halls, although the setting here in this song isn't really the Lexington Queen, I think. The sultriness of Osawa's music and the silkiness of his vocals have me assuming someplace more intimate in one of the side streets of Roppongi or Shinjuku where the drinks are still cold, the lights are low and the dancing is hot.

And before I further lapse into my faux-Spillane or faux-Chandler, let me say that "Slow Dance" was written by poet Natsuo Giniro（銀色夏生）, who had also provided lyrics for Osawa's "Soshite Boku wa Tohou ni Kureru"（そして僕は途方に暮れる）. The song does have that urban contemporary feeling (with some Prince-ly riffs) but as I indicated above, the site is not the bright lights on the main street but an area that is necessarily darker. "Slow Dance" is a track on the singer-songwriter's 2nd album "Scoop" from 1984.
Posted by J-Canuck at 3:55 PM