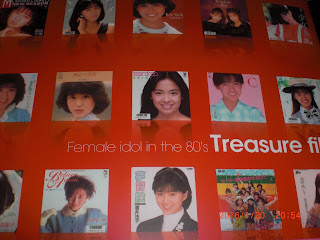 "I think the amateurishness fits this song perfectly."


This comment that I saw under the video for "Bobby ni Kataomoi" (Having a Crush on Bobby) by actress/aidoru Satomi Tezuka（手塚理美）is a good one, and most likely fits many an aidoru tune. Teenage love expressed by Japanese teenagers in a giddy way? Yup, a prime example is here. Nope, the singing isn't on Hiromi Iwasaki's（岩崎宏美）level at all but that's fine here since it's the story of a callow young girl's expression of one-way love in her own voice, something that a lot of listeners can relate to.

Moreover, the theory of not-so-great singers being elevated by some great songwriters can come into play here. "Bobby ni Kataomoi" was written by Takashi Matsumoto（松本隆）and composed by Yumi Matsutoya（松任谷由実）, and as soon as I heard the melody through the arrangement by Ichizo Seo（瀬尾一三）, I could peg it as a Yuming-penned number. There is that New Music flavour of the 1950s/1960s teenage idol pop with images of young Satomi surrounded by pink hearts while she savors a photo of this fellow Bobby in her bedroom.

"Bobby ni Kataomoi" was the second of two singles by Tezuka, released in April 1979. Only one album was released by her in 1976, "Juu-go-sai no Shouzou"（15才の肖像...Portrait of a 15-Year-Old）. Although her aidoru career fizzled away quickly, she has had a much longer career as an actress, including a role in one of the more famous trendy dramas of the 1980s, "Danjo Shichi-nin Aki Monogatari"（男女7人秋物語...The Autumn Story of 7 Men and Women）.
Posted by J-Canuck at 3:38 PM