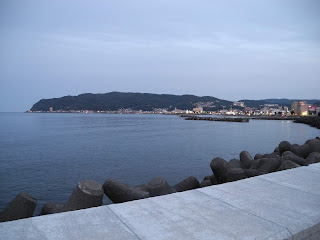 As I mentioned in the first article that I wrote up for singer Shoko Sawada（沢田聖子）, she's someone that I discovered through an episode of the radio program "Sounds of Japan" on CHIN-FM all those years ago, and is a chanteuse that I never got to see or hear in all those years in Japan. Basically, I've seen Sawada as one of those unsung singers who could have occupied that personally made-up genre called Fashion Music with her brand of mellowness.


Case in point: her song "Asphalt no Ue no Suna" (The Sand on Top of the Asphalt) from her 1984 8th album "Kaze no Yokan"（風の予感...Premonition of the Wind）. Now, from the title, one could be forgiven if the assumption that this was some sort of summery rock n' roll song by TUBE or Southern All Stars. But it's actually a tune that rather falls under this Fashion Music banner.

Written by Masao Urino（売野雅勇）and composed by Mieko Nishijima（西島三重子）, "Asphalt no Ue no Suna" is a fairly skippy song with some dramatic strings hinting in my imagination a train ride through Europe. But according to Urino's lyrics, it's about a woman revisiting a beach that she had once walked upon with her now former beau, and the visit hasn't exactly come off as being too happy. Seeing Nishijima's name connected with "Asphalt no Ue no Suna", I kinda figured that the song would sound pretty exotically classy since I've associated her with Fashion Music as well. By the same token, I would have also assumed that the song was created by Taeko Ohnuki（大貫妙子）.

For some strange reason, though, I think Sawada isn't exactly perfect in her delivery of the song. At some points, it sounds as if she were breathlessly rushing through "Asphalt", kinda crunching certain syllables. Perhaps that may have been the point, but it still sounds a bit strange to me. However, I don't have complaint about the melody since I do like my Fashion Music.
Posted by J-Canuck at 8:28 PM