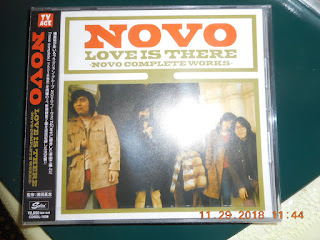 I'm figuratively and happily eating some crow for dinner tonight (literally, it was fish n' chips) since that package from Tower Records that I had been waiting for actually did arrive earlier this morning. The Canada Post rotating strikes were included in my last article that I wrote on this band NOVO, but they are now over (for now) and the CDs arrived, and one of them was indeed as you can see above the June 2013 release of "Love Is There ~ NOVO Complete Works".

What I found out, though, was that this 2013 release by this band that has been called according to one happy Amazon customer Japan's answer to Sergio Mendes & Brazil 66 is basically a reconfiguration of an earlier NOVO album from 2003 called "novo complete" aside from a couple of additions. One addition happens to be the subject of the first NOVO song that I discovered, the lovely "Ai wo Sodateru"（愛を育てる）in its 2012 form.


Having one go-round with "NOVO Complete Works" earlier this afternoon, I did get that impression of mellow tropicality in the band's music, including the one other 1973 single that NOVO had released, "Shiroi Mori"（白い森...White Woods）. Written by Toshiyuki Nishimori（西森利行）and composed by vocalist and keyboardist Yutaka Yokokura（横倉裕）, the song is a happy-go-lucky bossa nova delight sung by Yokokura and Aoi Fujikawa（藤川あおい）that is pretty darn Sergio Mendes to me. Not quite sure what those white woods are from the lyrics (maybe the white-capped ocean?...couldn't imagine it to be Aspen, Colorado in the winter), though the couple there make a content pair. At the same time as that Mendes influence, I couldn't help but also feel a bit of 60s group The 5th Dimension.


There is also an updated album version of "Shiroi Mori", this time sung slightly more delicately by vocalist Diane Silverson (who is co-vocalist on most of the tracks) and with some more jazz in the arrangement. But hey, there is no doubt about the bossa nova of it all here.


If I've read the liner notes in the album correctly, "Kono Hoshi no Ue de"（この星の上で...On This Star）, this love song was the B-side to "Shiroi Mori". Written and composed by Yokokura, it seems like there's a bit more oomph into his keyboards so I got reminded somewhat of the music of The Carpenters and even Vince Guaraldi.

The one more song that I will introduce here from "NOVO Complete Works" is the other addition to the 2003 album, "Guanabara Bay" which is titled after the second-largest bay in Brazil according to Wikipedia. Along with the other songs from the album that I've already written about, "Ai wo Sodateru" and "Mado ni Akari ga Tomoru Toki"（窓に明りがともる時）, "Guanabara Bay" has quickly become another favourite of mine with its mix of Latin and AOR.

This time, Yokokura is teamed up with Leeza Miller, and all I can say is that it's amazing about that Sergio Mendes connection, since Miller was one-half of the duet on the 1983 hit "Never Gonna Let You Go" which was a track on Mendes' self-titled album (I remember hearing that song all throughout my junior year in high school). Yokokura was once again responsible for the smooth melody while a person credited as T. Mann took care of the lyrics. Strangely enough, Barry Mann composed "Never Gonna Let You Go", so I'm not sure whether there is a familial connection there.

"Love Is There ~ NOVO Complete Works" is another nice addition to the collection. Surprisingly, despite the 14 songs, the album only takes about 48 minutes of your time...so each song is short and sweet. Since I first heard about Yokokura earlier this year, I've been getting very interested in his back catalog and this album has just kept the interest stoked. 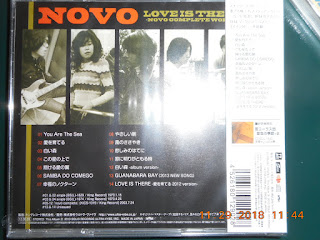