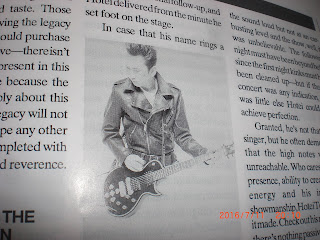 Tomoyasu Hotei's（布袋寅泰）18th single "Bambina" has a melody that has stuck with me all these years when I remember the guitarist's name. One fellow on YouTube put it thusly when he/she wrote that only Hotei himself can play that fiery guitar and sing out those rapid-fire lyrics written by Yukinojo Mori（森雪之丞）. However, I'm sure that hasn't prevented any of his fans from trying the song out at karaoke.


"Bambina" (Italian for baby girl) was released in April 1999, and it's Hotei style all the way on stage and in the music video. I was surprised to find out that the girl in "Bambina", model Niina Uchida（内田仁菜）, was perhaps all of thirteen years of age at the time, so along with that and the lyrics of the ardor for the titular girl, I couldn't help but feel that the director may have been partially inspired by "Lolita". To be honest, I was a tad creeped out especially when I saw Uchida in the suitcase.

Still the song is an energized tune of rockabilly fun and I'm sure that anytime it gets played at a Hotei concert, the joint will be jumping. "Bambina" went all the way up to No. 2 on Oricon and became the 70th-ranked single of 1999 as it went Platinum. Its first appearance on an album was for Hotei's "Greatest Hits 1990~1999" which came out in June of that year, reached No. 1 and ended up as the 21st-ranked album, becoming a million-seller.
Posted by J-Canuck at 3:26 PM