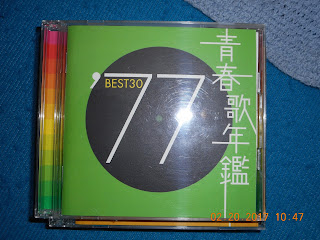 I've referred to this before, but as much as that huge pyramid of 80s aidorus separated into ranking levels existed, I think there was also that somewhat more obscure but similar 70s pyramid of teen singers.


There were those singers such as Momoe Yamaguchi（山口百恵）, Hiromi Iwasaki（岩崎宏美）and Pink Lady（ピンク・レディ）up at the top of that pyramid in the late 1970s, but to be honest, I don't have nearly as much knowledge about the B-team below those 70s stars as I do for the equivalent ranking with the 80s aidoru. However, I did find out about one such singer recently from the late 70s second tier.

Her name is Yumiko Araki（荒木由美子）and she hails from Saga Prefecture, which is the setting for one of this season's most popular anime incidentally speaking, and she's currently known as a singer, tarento and actress.


In 1976, when she was around 16 years of age, she earned herself a prize at the 1st annual Hori Pro Talent Scout Caravan, a talent show whose Grand Prix winner was none other than Ikue Sakakibara（榊原郁恵）. Then, some months later in June 1977, Araki made her singing debut with "Nagisa de Cross" (Crossing at the Beach) which earned her some Best New Artist honours alongside the aforementioned Sakakibara and Mizue Takada（高田みづえ）.

"Nagisa de Cross" was created by the husband-and-wife team of Ryudo Uzaki and Yoko Aki（宇崎竜童・阿木燿子）, the same tandem behind a number of Momoe Yamaguchi's later hits such as "Imitation Gold"（イミテイション・ゴールド）. Finding this out as I listened to the song, I could pick up on the tough girl feeling as Aki's lyrics seem to relate a fierce rivalry between two girls over a guy during the summer (from the title, I had initially thought it was about volleyball). It's almost as if Araki was the teen version of the jaded seen-it-all done-it-all character that Yamaguchi was portraying through her hits, although we all know that Yamaguchi was still very much an adolescent herself at that time.

One other thing that I picked up on as "Nagisa de Cross" was playing in my ears was the overall arrangement by Koji Makaino（馬飼野康二）. That rumbling melody had me thinking of tough girls and guys and their motorcycles which then reminded me of Akina Nakamori's（中森明菜）"Ni-bun no Ichi no Shinwa"（1/2の神話）that would come out several years later in the 1980s. The interesting point was that Nakamori was seen as the heir apparent for Yamaguchi through her image and deeper voice.


Her debut single didn't particularly take Araki into the stratosphere as "Nagisa de Cross" peaked at No. 56 on Oricon and sold 44,000 records. However, she would release a total of 10 singles up to 1980 along with 4 albums while also entering the tarento and acting worlds of the geinokai. In 1983, she then married fellow entertainer Masayuki Yuhara（湯原昌幸）and retired for many years before making a return in 2004.
Posted by J-Canuck at 10:47 PM