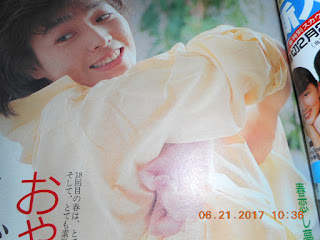 By kismet, I guess this article could be considered to be a sequel to a couple of other articles with one being a slightly more distant cousin of sorts. Earlier today, I had written about the City Pop tune "Tawamure no Koi no Mama ni"（たわむれの恋のままに）whose refrain sounded fairly similar to the one for the song of this article here. And since I didn't want to leave readers hanging, I've decided to write on it tonight. The other cousin is the article that I'd written was "Osaka Tsubame"（大阪つばめ）just in the last several minutes, simply because 80s aidoru Yoshie Kashiwabara（柏原芳恵）is a born-and-bred Osakan herself.


"Shinobi Ai" is Yoshie Kashiwabara's 23rd single from September 1985. According to the J-Wiki article on the song and its lyrics that fairly scream "TAKE ME, I'M YOURS!" (well, not so loudly), the theme is about having an illicit affair. I was trying to figure out the meaning of shinobi in this case since the title is written in hiragana and depending on the different kanji, the definitions are quite different. If it's read as 「偲ぶ」, then it could mean "nostalgic" but the other kanji 「忍ぶ」could refer to "concealed" or "enduring". Frankly, I would go with the latter. The above is of Yoshie-chan's 2nd appearance on the Kohaku Utagassen singing "Shinobi Ai".


I do like the original recorded version for the single. "Shinobi Ai" has that hint of City Pop in it and that breathy synthesizer intro adds some sultriness to the atmosphere. Plus, the arrangement (especially with the backing chorus) makes it sound like a ballad that Hiromi Iwasaki（岩崎宏美）could have performed at that time as well. The song peaked at No. 9 on Oricon and also got onto her 12th studio album of the same name from October 1985. That release got as high as No. 17.


Surprises are always welcomed on "Kayo Kyoku Plus" when it comes to writing about songs here. For example, the lyricist and composer for the song is Toshihiko Takamizawa（高見沢俊彦）, one of the members from rock band ALFEE, and I found out here that Kashiwabara had actually provided a cover and not an original song. The original version was actually recorded all the way back in November 1979 as a B-side for Chika Takami's（高見知佳）5th single, "Cezanne no E"（セザンヌの絵...A Cezanne Painting）, and that original was titled "Shinobi Ai ~ Don't Leave Me Alone" with a different set of kanji（しのび逢い...Secret Encounter[?]）.

Although the lyrics are the same, the song here by Takami sounds more melancholy, innocent, folksy and 70s...perhaps as if the lovers are high school kids in a Romeo & Juliet situation sneaking off for a double-straw milkshake in a cafe on the other side of town. No idea how well the single did, but I'm glad to know of the song's original existence.
Posted by J-Canuck at 8:50 PM