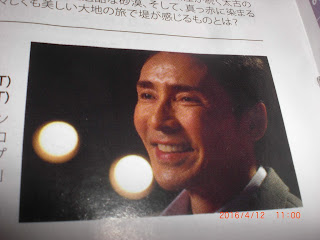 ca·thar·sis /kəˈTHärsəs/
noun
1. the process of releasing, and thereby providing relief from, strong or repressed emotions.
(from Google)

Yup, this is a word that I learned from my high school English class way back when. It was one of the several terms that had been taught to us in class to assist us in explaining various things when we tackled the literary classics. However, being a Trekkie, it was best used when I saw Spock or any other Vulcan atypically go nuts on "Star Trek".


True, catharsis isn't exactly a word that would be bandied about in regular conversation, although maybe its adjectival form, cathartic, has a bit more mileage. So it's even more unusual to see the verbatim word actually used in a title for a Hiromi Go（郷ひろみ）song. Even the J-Wiki article for Go's 36th single, "Wakasa no Catharsis" (Catharsis of Youth), had to provide some clarity for the word, and from the article itself, I learned that when the song was featured on "The Best 10", the definition was placed on screen since most likely viewers and everyone else at the studio had question marks hovering their heads.

Anyways, I've fully spent half the article more or less on catharsis. Let us get into the song itself. "Wakasa no Cartharsis" was released in November 1980 which was incidentally an ideal time for it to come out since, as I've said all along, autumn is the time when romances come to die. Yoko Aki's（阿木燿子）lyrics indeed touch upon the very topic although I'm not sure whether the emotion involved is all that strong. However, Shunichi Tokura's（都倉俊一）melody is plenty bouncy in somewhat of a European way. In fact, I think that there is a road trip across the countryside in that music.

In addition, I have to say that Go was really rocking that hairstyle on the record cover. You go, Go!

The above video has Go performing "Wakasa no Catharsis" with more of a rock kick at a 2007 concert. (I'm afraid that video has been taken down.) The song hit No. 15 on Oricon and ended up on his 16th album "How Many Ii Kao?" (How Many いい顔）which came out on New Year's Day in 1981.
Posted by J-Canuck at 7:42 PM