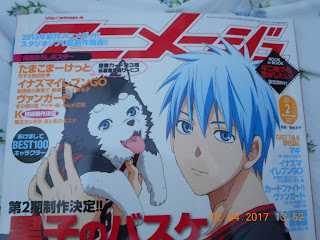 Didn't catch "Uta Kon"（うたコン）last night as I usually would because I was actually out last night with a few close friends for a Peking Duck dinner. I didn't want that cholesterol to go to waste, after all. In other news, my latest package from Tower Records has been in Toronto for the past couple of days where it will probably be having an extended stay at a processing centre while the rotating strike-influenced backlog attempts to be cleared.

Anyways, back on Sunday when I met up with my anime buddy, we had our usual anison hour. My friend decided to play a few tracks from his newly-acquired soundtrack of the summer anime "Harukana Receive"（はるかなレシーブ）. Track 1, "Rise", immediately grabbed my attention with its happy and high-paced Latin beat. This is the vocal version (unfortunately I couldn't find out who the vocalist was) created by Rasmus Faber who was behind the entire soundtrack, but the instrumental version of it was played throughout the show at various points.

It's a great tune which has been able to pull me away from the current snow-laden weather outside, and "Rise" even reminds me of "Life" which was the wonderful Mondo Grosso creation from 2000. With a few more of these tropical tunes, I may just survive the Canadian winter to come here.
Posted by J-Canuck at 8:05 PM