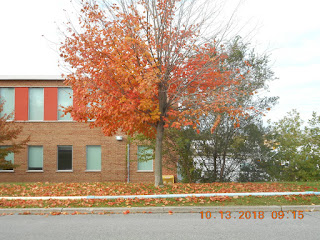 Definitely feeling that headlong pull deeper into autumn. Over the weekend, we in North America turned the clocks back one hour and that made a fairly big difference. The sun basically disappeared just a little after 5 pm today, and so for the next several weeks, night will be creeping on us that much faster until December 21st.

A few weeks ago on "Uta Kon"（うたコン）, I heard a rather melancholy ballad that I could easily peg being from decades past. Titled "Shuutou" (Autumn and Winter), it's a song about love lost and the consequences felt by one person. It is an apt autumn kayo since often enough, autumn going into winter has been the setting for the death of romance in Japanese songs.

May J. and Aya Yamamoto（山本彩）did a duet on "Shuutou", and the arrangement was elegant enough to attract my attention about where this song had come from. And the story behind it adds a further layer of sadness but also happiness to the legend. The original singer and lyricist was Jouji Nakayama（中山丈二）who had recorded "Shuutou" onto a demo tape shortly before his untimely passing at the age of 36 in 1980. Douji Horie（堀江童子）created the music for the song. The above video apparently has Nakayama's actual vocals although since the J-Wiki article on the song mentioned that it was just him and his guitar on the demo tape, the dramatic violins were probably added later.

After Nakayama's passing, some of his friends such as TV personalities Hiroshi Sekiguchi（関口宏）and Maki Carrousel（カルーセル麻紀）, and actor Toru Minegishi（峰岸徹）helped out to get "Shuutou" produced via 400 records. Afterwards, the song started quietly getting known.


In 1983, a singer by the name of Miki Tachibana（橘美喜）released a cover version and it sparked a lot of other singers to provide their own version of "Shuutou". Although Tachibana's cover doesn't exist on YouTube, I could find another accomplished take of the ballad via Daisuke Hara（原大輔）who sings in a number of genres including folk, New Music and chanson. This version was one of the later ones since it was released in October and it was actually his debut single under this stage name (he was born Masaki Takanashi/高梨雅樹 and was one-half of the folk group Leila（レイラ）in the mid-1970s). The single peaked at No. 19 and became the 90th-ranked song for 1984.
From what I found in Hara's file, apparently seven singers including Hara released their version of "Shuutou" in 1983, so Mizue Takada（高田みづえ）must have been the eighth since her version came out right on New Year's Day 1984. This was her 22nd single which actually reached as high as No. 22 on Oricon, selling around 136,000 records. For the yearly rankings, it placed No. 100, just 10 ranks down from Hara's version.


I found Takada's version more in the Fashion Music vein (I really have to talk more about this rather intriguing sub-genre soon) with that tinkly piano intro and even more shimmering strings. She also appeared in the 1984 Kohaku Utagassen to perform this song. The video of that performance is above this paragraph, and although "Shuutou" is sad on its own, there was an added reason for all of the tears shed by Takada and some of her fellow members on the Red team. It had been announced that the singer would be retiring from show business midway through the following year so December 31st 1984 was her 7th and final appearance on the special which included 5 straight appearances up to that point.

Although I couldn't find out when exactly Teresa Teng（テレサ・テン）had released her version of "Shuutou", I felt that I needed to feature her as well for her wonderful performance. I think there was even more emotion in her take especially when it came to the refrain. Her vocals also seemed to come across as more intimate due to some of that whispery quality.
Posted by J-Canuck at 8:21 PM