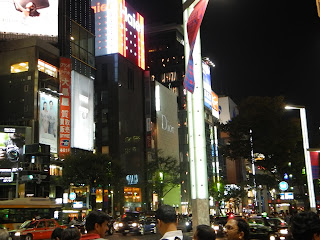 One of the weird things about life in Tokyo was that despite all of the nighttime activities that can be partaken in one of the world's largest cities (with the music to back it up), the city tended to shut down surprisingly early at night. Well, to be more accurate, the public transit closed up shop shockingly early.

My buddies and I had to keep an eye on our watches after a night out even on a Friday or Saturday since the subways usually had their final trains running around midnight. And it was always quite the thing to do the mad Olympic dash with everybody else at Iidabashi Station between the Yurakucho and Tozai Lines since the very last train only went as far as Toyocho, far short of my home in Chiba Prefecture. The second-last train was my last train to my neck of the woods. Japan Railways was only slightly more lenient back in those days. I can only hope that the transportation has been given more leeway into the wee hours since my return to Toronto.


Well, all that prelude was to help introduce this song "Midnight Tokyo" as performed by Taeko Kawabe（川辺妙子）. Not too much available about this singer; in fact, what little I could find wasn't on J-Wiki but at the Showa Pops Wiki. Kawabe hails from Hokkaido Prefecture, and her debut single was this very song in July 1969.

On first hearing "Midnight Tokyo", I thought that it was a bit reminiscent of Ayumi Ishida's（いしだあゆみ）Mood Kayo classic "Blue Light Yokohama"（ブルーライト・ヨコハマ）with the horns and the silken vocals of Kawabe. As it turns out, this isn't really a coincidence since "Midnight Tokyo" is actually one of Kyohei Tsutsumi's（筒美京平）early works, and he was the same fellow who had composed "Blue Light Yokohama". Still, perhaps it's the singer's delivery or the arrangement but there is a certain innocence to the proceedings which also had me believing that the song could also be classified as a regular love kayo. Toshiko Ohinata（大日方俊子）wrote the words about a woman who wants to be with the man of her dreams at least one dance longer.

As for the midnight transit curfew in Tokyo, it doesn't really matter anymore. Now if I'm not at least relaxing at home by eleven o'clock, I probably wouldn't last too well the following morning, so I make sure to be home a lot earlier nowadays. So, next time I'm in the Big Sushi, I will be happily tucked into my hotel bed by the witching hour.

Strangely enough, I did find another "Midnight Tokyo".
Posted by J-Canuck at 3:47 PM