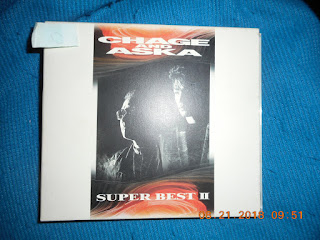 Earlier this morning, NHK's "News at 9" was on and there was apparently a feature on singer-songwriter Ryo Aska（飛鳥涼）. I was having breakfast at the time so I didn't have a direct eye on the TV but when I was able to grab a view, I saw a middle-aged and introspective and probably a penitent man. I couldn't hear too clearly but I think he is trying to make another go at his career after his latest problem with drugs a few years earlier.


As I've mentioned in past articles, it's always interesting to see and hear longstanding music acts when they first debuted since comparisons can be made between the sound that I'm accustomed to hearing from a singer or band and the sound that had been generated at the very beginning of the career; a prototype version, you might say. Chage & Aska（チャゲ&飛鳥）are no different. For years, I've known Shuuji Shibata（柴田秀之）and Ryo Aska as these simultaneously singing epic balladeers who can sing the heck out of a love song and an uptempo pop number with the force of a cannon.

I've finally been able to listen to their debut single "Hitorizaki" (Blossoming Alone) which came out in August 1979. Their heartfelt voices were already there but they were paired with this contemplative 1970s folk sound. Then, there was their first nationwide appearance to sing this very number on Fuji-TV's "Yoru no Hit Studio" (which I believe is represented in the above video). I found out in the J-Wiki article for "Hitorizaki" that Chage & Aska had been called up urgently by the show's producers when the originally scheduled Takuro Yoshida（吉田拓郎）had to cancel suddenly. There wasn't even time to change the set which had been built to fit Yoshida's appearance.

No matter. Looking at the above introductory performance to Japanese fans, it was obvious that Chage & Aska made the most out of their golden opportunity. But man, would you look how cute they looked back then? No cool suit (and coiffed short hairstyle) for Aska and no hat or sunglasses for Chage! They looked like a pair of busking university kids. Ahhh....those humble beginnings.


Aska wrote and composed "Hitorizaki" whose lyrics deal with a woman encouraging a now-former beau to buck up and get on with his life without her. But with that delivery, I think the song can be used as a song of encouragement in general. The song didn't too badly for a debut, peaking at No. 24, but it became a longtime occupier of Oricon by hanging around in the Top 100 for 31 weeks. The song also made it onto the duo's debut album "Kazemai"（風舞...Wind Dance）from April 1980 which made it all the way up to No. 11. The above video has Chage & Aska coming back onto "Yoru no Hit Studio"（夜のヒットスタジオ）some years later, it looks like, and in the appearance and sound that I've been familiar with all this time.
Posted by J-Canuck at 9:56 PM