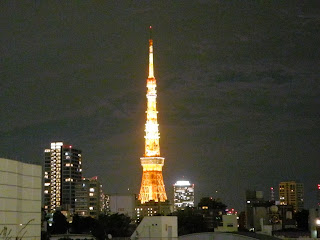 Performing a tangent from yesterday's anecdote about midnight life in Tokyo, one hot Friday evening in July 1999, a bunch of us caught the very first showing in Japan (of course, at 12:00 am) of the first "Star Wars" prequel, "The Phantom Menace" in Shinjuku. The movie already had its grand premiere Stateside some weeks beforehand, so I had heard about some of the negativity surrounding it.

I couldn't quite believe the hoopla surrounding us as we waited those few hours. The media was out in full force (no pun intended) with reporters, TV cameras and helicopters worthy of a presidential visit, and virtually everyone except us dressed up as Jedi, Sith or stormtroopers. Ironically, we in our suits were the freaks. Anyways, we saw "The Phantom Menace" and after getting out of the theatre, I suddenly came down with a bad case of desperate rationalization. And judging from some of the other folks who exited with me, I wasn't the only one. I think the above scene of the final encounter between the Jedi and Darth Maul was the one highlight.

But to wrap up this part, it was about past 2 am when we got back into the wilds of Shinjuku, so of course, the subways and trains were all shuttered, and taking a taxi back home would have required way too much yen. As a result, we all decided to hit an all-night ramen joint on the walk up to Takadanobaba and after that, some of us went to an all-night café until the Tokyo Metro was back up and running. I was just happy that all of this happened on the cusp of a weekend.

While listening to Taeko Kawabe's（川辺妙子）"Midnight Tokyo" that I would write about yesterday, I found another "Midnight Tokyo" sung by Frank Nagai（フランク永井）. My initial assumption had been that it was a cover for the Kawabe original, but no such animal. The only similarity is the title.

Nagai's "Midnight Tokyo" is an April 1971 single whose lyrics by Jun Hashimoto（橋本淳）relate the trials and tribulations of human relationships in the swankier parts of the big city. Meanwhile, Tadashi Yoshida's（吉田正）melody is a particularly swinging Mood Kayo. Just imagine Nagai with a trench coat slung over his shoulder with a hat positioned at a rakish angle on his head, and he would be in the perfect mood to sing this one. There's something quite Sinatra about this "Midnight Tokyo".

I could only wish that I had looked that dapper after watching "The Phantom Menace". Instead, I was in pretty good need of a shower to wash away the smell of ramen and cinematic disappointment.
Posted by J-Canuck at 9:43 PM