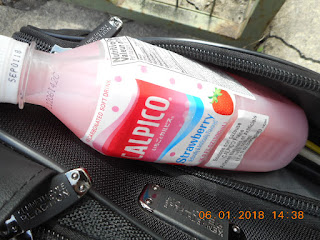 Indeed, the above is a June 2018 photograph of a version of one of my favourite drinks, a strawberry Calpico. As I recall, I bought it at a shop which specializes in Japanese foodstuffs in Kensington Market in downtown Toronto, and it was already quite humid on that Friday. The Calpis really hit the spot although it cost me over 3 bucks Canadian!


Now, there hasn't been a JADOES（ジャドーズ）article on "Kayo Kyoku Plus" for almost three years since Marcos V.'s "All My Dream" and it was back in 2014 when I put up "Friday Night". Well, time to rectify this.

Here I offer "Roku-gatsu no Photograph" (June Photograph) from the band's 2nd album "Free Drink" (which was certainly not my Calpis!) released in July 1987. Written by JADOES percussionist Kensaku Saito（斎藤謙策）and composed by guitarist Kazumasa Denda（伝田一正）and bassist/vocalist Hideki Fujisawa（藤沢秀樹）, aka DANCE☆MAN, the whole story revolves around a photograph falling out of a fellow's old notebook which turns out to be a shot of his former flame with the tons of memories that suddenly bubble up in his head. With that super funky beat and that downtown feeling, I can only believe that the guy has to be at least a university student and most likely well into his working life. I think it's a bit intense at the high school level. Overall, this work by JADOES rather strikes me as a more booming form of an Omega Tribe song. Love Fujisawa's vocals and all those kakkoii keyboards!

I never got to do it in my own JADOES article so here is an introduction of the fellows from the band itself. I've already mentioned Fujisawa, Saito and Denda, but there is also drummer Yukio Shimamura（島村幸男）, and keyboardist Akihiro Hirama（平間あきひこ）. Later on, with the exits of Shimamura and Hirama, Tatsuya Watanabe（渡部達也）and Akira Sakai（酒井彰）came on board in the mid-1990s. As for how the guys came up with their distinct name, I can only speculate that it may have come from their catchphrase of "Ja ja ja ja ja ja ja ja jan!"（じゃじゃじゃじゃじゃじゃじゃじゃじゃんッ！）which was used when going from one comic segment to another. I mentioned in "Friday Night" that these guys had started out as a group of comics with a musical touch.

Below is a longer and perhaps creamier version of "Roku-gatsu no Photograph". Tomorrow, we start San-gatsu!

Email ThisBlogThis!Share to TwitterShare to FacebookShare to Pinterest
Labels: 1987, City Pop, J-R and B, JADOES, Single