The year was 2017 and top 80s aidoru Shizuka Kudo (工藤静香) decided to record a brand new album – her first in 12 years – to commemorate her then 30th years old anniversary as a solo singer.

In general, albums from artists past their prime are not expected to be particularly good, especially coming from someone like Shizuka Kudo, who haven’t been really involved in singing since, I don’t know…, maybe her marriage and pregnancy during the turn of the century. Sure, she has released a couple of albums, some singles and tons of compilations since then, but music was not a priority in her life anymore. That being said, newest album “Rin” (凛) is actually a very good piece of work, and we can sense all the care she has put in it, from the musicians behind the compositions, to her actual singing.

One of the highlights of “Rin”, “Kinki to Tsukiakari” is a pretty straightforward pop-rock tune (love the catchy double claps during the guitar-centric instrumental sections after the first and last choruses), which serves as a good example of the route chosen for the album. Actually, during the promotion time, Kudo actually revealed that she wanted to record an edgy and more rock-oriented album, kind of distant from the strong aidoru-pop of her prime years. Even if there's some kind of variety on the album, ranging from ballads to more adult-oriented pop, I think she succeeded on doing that. Also, her vocal performance right now is pretty professional, even with all her well-known quirks (I’ll never forget the iconic Miracle Hikaru [ミラクルひかる] impersonating Shizuka Kudo).

“Rin” was released in August 2017 and reached #21 on the Oricon chart. Lyrics and music for “Kinki to Tsukiakari” were composed by mafumafu (まふまふ). As for the arrangement, Zenko “Gibson” Mitsuya (三矢禅晃) and mafumafu were the responsible (if you found that “Kinki to Tsukiakari” sounded like an anime opening, well…, it wasn’t used as one, but both guys involved in it are related to Vocaloid, anime and the video-game industry). 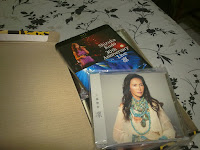 “Rin” and the blu-ray edition of Kudo's 30th Anniversary live
Posted by Marcos V. at 3:27 PM