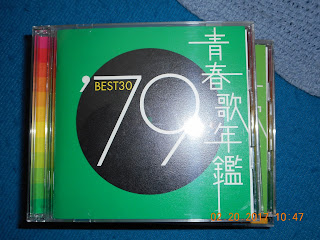 It was an exciting time for me once the 1980s came in. With my trip to Japan in 1981 finally opening my ears and eyes up to music as an enthusiast...on both sides of the Pacific...the genres flowed right in. Two of the genres that hit me immediately were New Wave and technopop. Of course, at that time in my youth, Yellow Magic Orchestra was the band for the latter genre on the Japan side of things, although in Canada and the United States, the computer music was also getting my attention here, too, with acts such as Gary Numan and The Human League. At the same time, New Wave had gotten my attention with bands such as Blondie but also from Japan via Plastics. Quite heady bands, they were.


But I've been having to play catch-up over the past several years, and this blog has been helping out since it has inspired me to search through the long history of Japanese pop music. Some digging was needed, and I've realized that though YMO was the most visible of these way-out bands, there were other acts that should have gotten my attention. Plastics did get some of that, but now I've discovered this other group whose members had started their musical career as a progressive rock band called Mandrake only for the vocalist/guitarist Susumu Hirasawa（平沢進）to become disillusioned over its direction into commercialism, according to this Wikipedia article.

However, Hirasawa got his mojo back, so to speak, through witnessing the advent of punk music and then being introduced to the New Wave-loving Nylon 100% cafe/live house based in Shibuya, Tokyo. The band underwent a dramatic metamorphosis and emerged as P-Model, a New Wave/synthpop band born on New Year's Day 1979. Strangely enough, this was a group whose name I'd heard in the wind over the years but never knew what they were about until very recently.

Although it looks like the lineup has changed over a number of times, Hirasawa has been the one constant axis. Several months into the summer of 1979, P-Model released their first single, "Art Mania", created by Hirasawa, in July. The Japanese title was the far longer "Bijutsukan de Atta Hito darou" (美術館で会った人だろ...You're the One I Met at The Museum). Their first album came out the next month titled "In A Model Room".


With YMO, I've learned that initially at least, the technopop there was all about giving tributes through older genres such as surf music and exotica through the filter of synthesizers. But with P-Model, it was definitely embracing the New Wave. As soon as I heard "Art Mania", which is about a visitor to a museum getting rather hung up on another fellow art lover, memories of Plastics washed through me once more along with the weird and exciting music videos that I had seen as a kid sneaking in some midnight viewing through local Toronto programming such as "The All-Night Show" and "City Limits". I can hear Devo, Plastics and Blondie, and wonder whether Japanese outfits such as Denki Groove（電気グルーヴ）and POLYSICS had gotten some inspiration from P-Model. All hail the spiky haircuts and loud plaid tight pants!

I mean, the music is as spiky and frantic as a punk rocker (although the band members had pretty conventional haircuts [very nice conditioner, it seems like] in the videos), and the arrangement seems to represent the transition from punk into New Wave with that thrash of the guitar and the tinkly synths that remind me of early video game music. Still, the relentless pinball-bumping music may have gotten folks into a slam-dancing mood. At this point, I may ask my old friend and fellow music connoisseur about his thoughts on "Art Mania".
Posted by J-Canuck at 8:54 PM