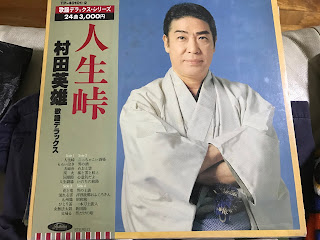 Having talked about rather unorthodox entries by Hachi and Michi, as well as one simple and lighthearted one by Haru-san, this pick for Muchi seems the most... normal, in the sense that it is a true blue enka song.

That record you see up there was an incredibly rare find I came across during my first visit to an old record shop in Singapore a couple of years ago. I was stunned to see that there were a fair number of records by the likes of Hideo Murata (村田英雄) there, but more stunned was I when I pulled the record out backwards to find this:


Prior to this, never would I have thought to find a piece of memorabilia with the autograph from any of the Yonin Shu at random, but there it was... ... That is his autograph, right? I mean, it's on his album and dated the year showa 55 (1980). I've never seen Muchi's autograph before and considering how unbelievable the find was to me, somehow I'm afraid that it may not be it...

But doubts aside, this album from the Kayo Deluxe series named "Jinsei Toge" has 2 vinyls containing some of the gruff singer's past hits like "Hana to Ryu" (花と竜) as well as up-to-date works like the titular song. From the annals of my mind, I recall that I'd heard "Jinsei Toge" on the then "Kayo Concert" a few years ago. I can't exactly remember who sang it - it was either Kiyoshi Hikawa (氷川きよし) or Takeshi Kitayama (北山たけし). But whoever it was, I had a good impression of it and would've gladly given it another listen, so that gave me another good reason for me to get the album.

"Jinsei Toge" is an encouraging enka that's as manly as the singer himself, even having deep drum rolls at the start and throughout the song, as if to fire-up the listener. Then you have Murata growling in his usual forceful manner about overcoming the many trials that life presents and that no matter what happens, you'll be fine. This actually more or less matches the first theme of today's episode of "Uta Kon", which I think featured some kayo about persevering and achieving one's goals.

Writing the words to "Jinsei Toge" was Tetsuo Miyahara (宮原哲夫), and the melody was done by Teruo Komatsubara (小松原てるを). The song came out in August 1979, and a few months later Murata sang it on his 18th appearance on the Kohaku. The link to this performance is above this paragraph.
Posted by Noelle Tham at 11:16 AM