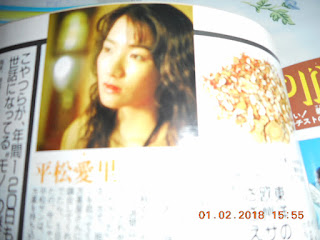 Still loving those surprises while working on the blog. One of those surprises involved the realization that Canada's own David Foster had a hand in helping out a few Japanese singers in the 1980s such as Mariya Takeuchi（竹内まりや）, Ami Ozaki（尾崎亜美）and Naoko Kawai（河合奈保子）. Plus, it was indirectly through "Kayo Kyoku Plus" that I found out that Foster had even been one-half of the duo Airplay, about as AOR as a band could be.

Well, something similar has happened with someone that I had thought was a popular 90s singer with an appealingly chirpy and perky pop style. Eri Hiramatsu（平松愛理）is a singer that has some representation on my shelves because of her velvety vocals and fun music, and I think she is arguably most well-known for "Heya to Y-Shatsu to Watashi" （部屋とＹシャツと私）whose music video could get folks into a tearful mood.


Perhaps then I should read the fine print a bit more in detail when it comes to J-Wiki articles. All this time I had assumed that Hiramatsu had always been a solo singer starting in the final decade of the 20th century, when actually she did participate in a couple of bands back in the 1980s. For instance, she got together with three other people to form an amateur group, ERI & WONDERLAST in 1982.

Once that band broke up in 1986, Hiramatsu made her way up to Tokyo and while working part-time, she created songs which led to her going to record companies twice a week to sell them on her works (according to the journal "Daigaku Jihou"「大学時報...University Newsletter」 in their November 2007 edition). The following year, she got together with AOR singer-songwriter Kazuhito Murata（村田和人）, another singer-songwriter from Wakayama Prefecture Tsukasa Nishi（西司）, and Keisuke Yamamoto（山本圭右）, the leader of the band Piper to start the band Honey & B-Boys. The group recorded one album "Back To Frisco" for release in March 1987; the album also signified Hiramatsu's first record.

From the link in the previous paragraph for "Back To Frisco", you can see the cover of the album which looks like a picture of some pastoral scene (Napa Valley, perhaps? Sorry, I don't know the geography for California very well.). Considering that I've heard that residents of San Francisco don't like their city being called "Frisco", I would like to get Larry's opinion on this since he does live in the area.

I first discovered the sign of Honey & B-Boys' existence on YouTube when I saw the video for one of the songs off to the right side of the screen. "Wine Light" is a pop song that starts off dreamy with a synthesizer sound flitting around like a butterfly before the bass and drums come in for the refrain. It's interesting for Hiramatsu's vocals which stay dreamy without some of that lower purr that I would associate with her 90s hits. Moreover the overall arrangement has "Wine Light" sounding like a Piper tune with Murata and Yamamoto providing backing vocals. Yamamoto did compose the song while Emi Kanda（神田エミ）wrote the lyrics.


"Juu-go-fun Matte Blue Sky"（15分待ってBlue Sky...Wait 15 Minutes, Blue Sky）strikes me as being rather New Music in the sense of another band for that genre in the 1970s, Sugar Babe. Hiramatsu, and I think Yamamoto, handle this duet. It's a very sunny and mellow and Sunday afternoon sort of tune. Written by Ikki Matsumoto（松本一起）and composed by former Sugar Babe member Kunio Muramatsu（村松邦男）, "Juu-go-fun Matte Blue Sky" is another part of my coalescing theory on whether the raison d'etre for Honey & B-Boys was as a sorta tribute to Sugar Babe (the final track is a cover of Sugar Babe's "Ame wa Te no Hira ni Ippai"「雨は手のひらにいっぱい」from their 1975 album "SONGS"). Also, this particular track had me thinking of the genre of California's sunshine pop that had its day in the 1960s with groups such as The Mamas & The Papas. There is that album title and cover that I've mentioned.


My final song here is "My Wish" which has Hiramatsu showing some of that voice that I've long known her for. Lyricist Kanda once again took care of things here but this time, it's Murata who composed this song and it does start off like one of his tunes. With the use of synths here and the arrangement for the tune to go at a more calming pace, though, it does have a different vibe compared to the first two tracks. In fact, I would say that "My Wish" sounds so intriguing that I can relate it to some of the material by the eclectic PSY-S.

As far as I know, Honey & B-Boys only released this one album, and though I searched, "Back To Frisco" no longer seems to exist online for sale. A pity, since this would be one release that I would like to get to know better. It's a fascinating find, to be sure, with this pop chanteuse of the 1990s joining forces with two artists from the 1980s AOR genre.
Posted by J-Canuck at 9:26 PM