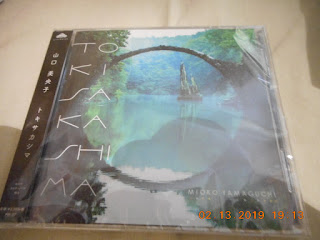 When I was translating a lot of small travel articles for a company over a few years previously, I encountered a term called shinrin-yoku（森林浴）. It translates as "forest bathing", and of course initially, yours truly had a few seconds of rather suspicious lewd thoughts until I found out that the concept actually refers to "forest therapy". Now shinrin-yoku has been said to provide health benefits just by folks simply existing among the trees, whether they be deciduous, coniferous or bamboo.

Seeing the cover of Mioko Yamaguchi's（山口美央子）latest album, her first in 35 years, "Tokisakashima" (you can take a look at the article for the title track to find out the derivation of the title), reading about the overall sound and themes in the album, and then finally listening to the songs themselves, I kinda felt that there was a shinrin-yoku effect being effected on me. Given general release a few weeks ago in January, I got my copy from The Logic Store a few days ago and have listened to it twice.

As I've mentioned, I've already written about the title track. I'm sure that more insights will come to me as I listen to "Tokisakashima" further but my overall reaction is that Yamaguchi's 4th original album is something to be savored on a cool spring/autumn day. The singer-songwriter herself has provided her own liner notes, and she has said that "Tokisakashima" is actually a sequel of sorts to her 3rd album "Tsukihime" （月姫）from all the way back in 1983. I can certainly agree with her assessment, because as I stated in the article for the title track, her voice hasn't really changed at all in those 35 years, and there is that dreamscape feeling in this album that was suffused in "Tsukihime". However, this time, there is also some of that joviality added that I heard in her first two albums "Yume Hiko"（夢飛行）and "Nirvana". Indeed, some form of synthesis has been achieved.

Unfortunately, the first track is not available on YouTube but "Seirei no Mori"（精霊の森...Spirit Woods）is the representative song for that shinrin-yoku effect. It has a very calming feel for listeners although it does abruptly go into some musical action as if it were reflecting the sudden darting of deer through the woods. I had to check the track and time to make sure that this was still the same song. Yamaguchi herself noted in the album that she truly realized the power of life through a group of woods that she now lives close to.


I could only find two more new tracks (all tracks were written and composed by the singer) dedicated to "Tokisakashima" at the time of writing but both are very interesting. "Koi wa Karageshi Natsu no Yoi / Ton-Ten-Syan"（恋はからげし夏の宵 / Ton-Ten-Syan...Love is Embers of a Summer Evening）, according to Yamaguchi, is based on a kabuki story and features Japanese instruments that have also popped up in songs such as "Satemo Appare Yume Zakura"（さても天晴れ 夢桜）and "O-Matsuri"（お祭り）from that debut album "Yume Hiko". Starting with those instruments, the song has an adventurous spirit, definitely based in Japan, but also has some nice grounding with those synthesizers making out as low strings. An odyssey is afoot here. Incidentally, if anyone from Logic Store can confirm my English translation of the title, that would be much appreciated.


"Ikoku Choucho"（異国蝶々...Butterfly from a Foreign Land）also starts out with that Japanesque feeling but then it just bursts into a frenetic technopop-ska beat that kinda made me want to bop my head around. There is a joint collaboration of the elegant melody punctuated by the ska and even a few computer bleeps here and there. Yamaguchi points out that the song is based on "Madame Butterfly", but looking at the lyrics, I also thought that they could have been referring to the increasing number of international marriages in Japan.


Contrasting with the natural therapy of the eight tracks of "Tokisakashima", there is the final 9th track which is actually Yamaguchi's original 2nd single, "Tokyo Lover"（東京LOVER）from 1981. The album version is on "Yume Hiko" but unlike the happy technopop there, the original single version, arranged by Jun Sato（佐藤準）, has got a light City Pop touch along the lines of Yumi Matsutoya（松任谷由実）and EPO of the early 1980s, thanks in part to some gorgeous brassy horns. I gotta admit that though I like both versions, those horns have rather dragged me to the single version's side.

Anyways, thanks to Jazm for giving me the nudge on "Tokisakashima" and to Toshi for sending over the album from the Logic Store! 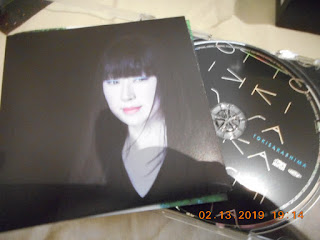