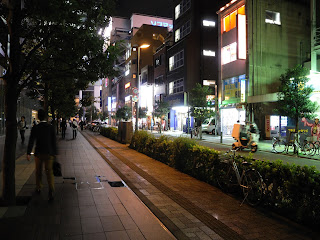 All I can say here is "What a difference 16 years make!".


My only knowledge of Michiyo Azusa（梓みちよ）had been for her recording of the adorable kayo classic "Konnichiwa Aka-chan" (こんにちは赤ちゃん）back in 1963 when she was around 20 years of age. Then earlier today, I found this video of this song titled "Yoroshikattara" (If It's OK With You) by Azusa, released in September 1979 when she was in her mid-30s.

It's definitely not for babies. Recorded as a commercial song for Partner Cigarettes, Azusa takes on vocals reminiscent of those for Momoe Yamaguchi（山口百恵）in character as the done-it-all, seen-it-all woman who doesn't suffer fools gladly. However, she adds on a further layer of what seems rather chanson-like; the accordion that comes in and out adds to that Frenchness.


Categorizing "Yoroshikattara" was intriguing since it felt like a somewhat updated Mood Kayo with some fast horns and bass, so that there was an additional tone of City Pop. I've always thought that City Pop was not exactly a son of Mood Kayo but more of a with-it nephew. Kudos to composer Kyohei Tsutsumi（筒美京平）while Yoko Aki（阿木燿子）, who has provided sultry lyrics to the aforementioned Yamaguchi's later hits, weaves a tale of high living and loving, and perhaps a hint that she can handle both men and women. Of course, since this was for Partner Cigarettes, the lyrics even have that actual word sewn in there, too. "Yoroshikattara" made it all the way to No. 30 on the charts.
Posted by J-Canuck at 3:04 PM