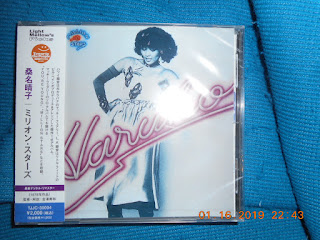 It took a while but I finally did get that Haruko Kuwana（桑名晴子）debut album "Million Kisses" (1978) over the Holidays. Having already written about a couple of tracks in there, "You're Young" and "Akogare no Sundown"（あこがれのSundown）, I finally pulled the trigger on my yen gun and it came on in.


From the above two songs, I definitely got the impression that this would be a very soulful beginning for the career of Ms. Kuwana, thanks to her honeyed and sultry vocals. Plus, the songs take things across the Pacific in terms of the overall sound. In fact, Side A of the original LP was apparently recorded in Hawaii while Side B was in Los Angeles.

The first track here today is from the L.A. side of things, "Machiawase"（待ち合わせ...Rendezvous）. About someone racing to meet that significant other, presumably somewhere in Tokyo (perhaps Hachiko?), before being considered tardy, it's a cool, driving and happy-go-lucky number of mellow funk. I think that there is something very City of Angels about it and yet there is an instrumental part near the end that brings things back to Tokyo. Both Haruko and her brother, singer-songwriter Masahiro Kuwana（桑名正博）, came up with the lyrics while frere Kuwana composed the music.


(The video was taken down but you can check 41:37 in the full album video below.)

As with remastered Japanese albums nowadays, the new versions often come up with bonus tracks, and "Million Stars" is no exception. One of those tracks is "Key wa Futari de"（Keyはふたりで...Key For Two）which was originally Kuwana's 4th single from August 1979. Written by Machiko Ryu（竜真知子）and composed by Kyohei Tsutsumi（筒美京平）, it's a playful City Pop strut where this time, one half of the relationship is racing in a car to meet the other half. Not surprisingly, this was created for a Nissan commercial.

Going back to the original tracklist, we have "Kaze no Naka ni"（風の中に...In The Wind） at 26:54 in which Kuwana seems to go more into the 1970s Linda Ronstadt frame of mind as she sings about sitting down on a hill somewhere and getting some natural therapy after what I assume is a breakup. It's a ballad that is more in the pop/AOR vein. 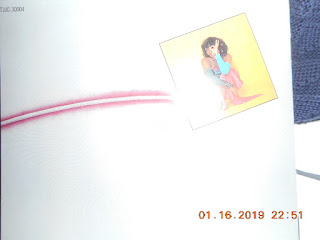 Track 2, "Sarigenaku sugi Yuku Toki ni"（さりげなく過ぎゆく時に...When Casually Passing） from the Hawaii side (3:45) is something that I could envision Kuwana singing at a party or in an intimate nightclub while appreciative guests/fans flock around the piano. With lyrics by Haruko and music by Masahiro, there is a dreamy arrangement while the story told here seems to be of two ships passing in the night with the possibility being that they may have had encounters in the past but for reasons unknown, those encounters will stay in the past. This was her 2nd single from July 1978 and "Akogare no Sundown" was the B-side.

The title track at 16:12 is totally sung in English and was written & composed by Chucky Souza with arrangement by Mackey Feary, the same fellow who came up with the original version of "You're Young". It's got a nice Latin beat although that drum sometimes sounds more like a very slow basketball dribble.

My final song at 20:06 is an interesting one since when I first heard it, I went "Where have I heard that one before?". As it turns out, it's a cover of "Give A Little" by the late Nicolette Larson, one of my favourites by her that I first heard when I got her BEST compilation. Kuwana spins "Give A Little" into a happy, funky and let's-strut-down-Meiji-Dori version. Frany and Bill Payne were responsible for this song. As comparison, you can listen to the original mellow take below.


For years, I've seen the iconic cover for "Million Stars" in "Japanese City Pop" and on YouTube, and I'm glad to say that I've finally gotten my copy. Will be giving this album repeated playings for the next number of years. 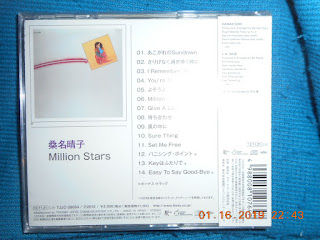