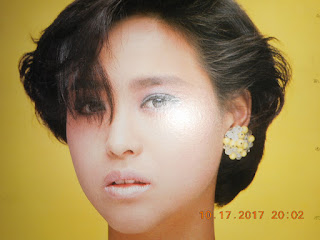 Enjoyed Recca's half-hour tribute to Seiko Matsuda（松田聖子）yesterday on Japan Top 10 which included "Ruriiro no Chikyuu"（瑠璃色の地球）, a song that I consider to be an epic coda of sorts to her pure aidoru phase. I first heard it on a borrowed copy of her 13th album "Supreme" in June 1986. Incidentially, the album did go all the way to No. 1.


Then I remembered that there was another song from that same album whose rather magical notes have haunted me up to the present day. In fact, it is the opening track for "Supreme", "Hotaru no Sougen" (Firefly Meadow).

Rather like a group of fireflies at night, "Hotaru no Sougen" has that magical and flittery feeling for the most part, before Seiko-chan goes into a soaring refrain about all those Photuris lucicrescens taking off into the night sky. It must have struck a lot of her fans the first time they heard it on the LP as a very different-sounding Seiko song as it incorporated a bit more synthesizer which is why the song has stuck with me all these decades.

According to the J-Wiki article on "Supreme", when "Hotaru no Sougen" was performed at a 2004 concert at Saitama Super Arena during her "Sunshine" tour, the opening notes of this song apparently sent folks into a frenzy. Takashi Matsumoto（松本隆）, no stranger to penning lyrics for Seiko's songs, took care of this one and all of the other tracks on the album, while I was surprised to learn that Masahiro Ando（安藤まさひろ）, leader of the fusion band T-Square was behind its composition. Back then, I never bothered to read up on who actually wrote the songs for anybody.
Posted by J-Canuck at 12:19 PM