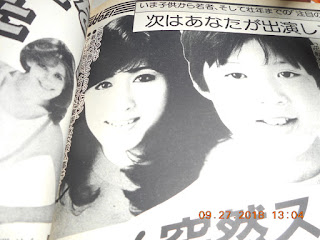 The only time up to now that I've written a Junko Mihara（三原じゅん子）song was all the way back in July 2012 for "Honki de Love Me Good"（ホンキでLove Me Good）which got Mihara her one and only appearance on the Kohaku Utagassen on New Year's Eve 1982. To be honest, it was the only Mihara song that I got to know.


In that article for "Honki de Love Me Good", I noted that at the time Mihara had been trying to get elected into Japan's House of Councillors. Well, the now-former singer/actress did get voted in and since then, she's apparently held a number of positions including one as Acting Director of the Public Speeches Division in the Liberal Democratic Party.

However, let's return to her music days, shall we? Although I hadn't been totally floored by Mihara's appearance on the Shibuya stage at the Kohaku (albeit, she sounded as if she had a menagerie's worth of butterflies in her stomach), I was curious about what else she had recorded in the early 1980s. I found one song from her 1983 studio album "Windy City ~ Junko In Chicago" titled "Silky Rain".

Her voice sounds quite a bit steadier here, and I like "Silky Rain" for its mix of urban contemporary and a bit of dramatic pop/rock. One observation that I've had is that she seemed to have a slightly breathier and deeper version of Akina Nakamori's（中森明菜）voice back then, and I have to admit that the arrangement of "Silky Rain" is pretty reminiscent of what Nakamori was also singing in those early days of her career. Daisuke Inoue（井上大輔）was responsible for the music while Etsuko Kisugi（来生えつこ）took care of the lyrics. I'm now interested in getting the album just for that cover of her and Chicago alone.

My discovery of "Silky Rain" was thanks to hearing it on Van Paugam's City Pop Radio last night. As most of you City Pop fans have already found out, his entire YouTube channel was terminated outright sometime in the last 24 hours which is a pity. Although I wasn't totally surprised that the radio was taken out (even VP hinted that the end may have been near), I was taken aback that the entire channel was wiped out since there was at least one video of his on the history of City Pop that I thought was quite educational. It's too bad that people will no longer be able to see that and it's even worse that the radio is now gone.

I went to Van Paugam's City Pop radio at least once a day and though I very rarely joined the streaming conversation, I did enjoy watching some of the banter that took place. The conversations didn't always involve City Pop or Japanese music per se but that was OK with me. It just seemed like an Internet version of a friendly and open club for people around the world to chat and enjoy each other's company. The club is now closed unfortunately, and though I can understand why JASRAC or other institutions would have said "Enough is enough", I only hope that they can relate to why a lot of us aren't too happy tonight. I ended up getting ideas to write articles on "Kayo Kyoku Plus" and I even ended up getting albums because of what I found on the radio so I'm fairly sure that others have done the latter as well.

Still, I don't want to portray this as a elegy for Van Paugam because he does have other venues that he can use to spread the gospel of City Pop and he has done very well for himself through events and even media interviews. I wish him all the best and thank him for all he's done up to now.
Posted by J-Canuck at 8:00 PM