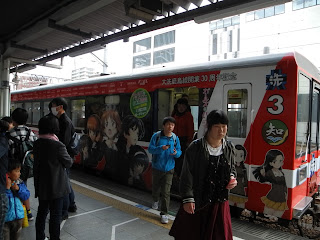 The above is a photo of the special "Girls Und Panzer" train going from Mito to Oarai in Ibaraki Prefecture where the hijinks of the beloved anime took place. However, I'm not talking about tanks here and for that matter, I'm not even talking about an anison this time.


But my anime buddy handed me a whole bunch of episodes of "Shinkansen Henkei Robo Shinkalion"（新幹線変形ロボ シンカリオン）recently, touting the greatness of this show. I even got to see the special episode of the tribute to the legendary "Neon Genesis Evangelion" with some of the characters in there and even the actual original theme song thrown in. It would have made certain anime fans swoon. However, since I'm not a train fan (although I admire the streamlined shapes of the Bullet Trains), I'm not quite sold on the merits of "Shinkalion" yet so I will have to take a look from Episode 1 and let you know later.

At the same time, though, my friend also showed me the above video of obviously a tore-ota's beloved train setup and its operation. An old junior high school classmate had something similar established all throughout his living room decades ago, and all I could say was that his parents must have been the most understanding pair of guardians. What got me intrigued in that video though was the song that was used as the background music.


With the appropriate enough title of "Train", this was a song by the hip-hop/reggae band Ketsumeishi（ケツメイシ）that was released as their 14th single back in April 2007. I did hear about this band before but never paid any attention to them. However, starting with the catchy march-like rhythms and the spacy synths, "Train" got me to come aboard on a soothing musical ride of encouragement with a bit of rap thrown in.

There were a couple of videos that I had wanted to put up; one was the actual music video which was really well done for its animation and poignancy, and the other was a tribute long-form commercial for Japan Railways. But unfortunately, it looks like both got the copyright strikes so they are no longer there. Still, the above video will do quite nicely.

Banding together in 1993, the lineup for Ketsumeishi consists of Ryo Tanaka（田中亮）, Ryoji Otsuka（大塚亮二）, Daizo Yoshida（吉田大蔵）and Kenta Kohno（河野健太）. According to Wikipedia, the name of the band comes directly from a type of herb used in Chinese medicine. When it comes to "Train", I think, indeed, Ketsumeishi makes for a nice salve. The song made it up to No. 3 on Oricon.
Posted by J-Canuck at 8:14 PM

Email ThisBlogThis!Share to TwitterShare to FacebookShare to Pinterest
Labels: 2007, J-R and B, Ketsumeishi, Pop, Single