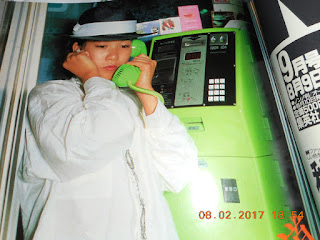 About a couple of days ago, I had found 80s aidoru Chiemi Hori's（堀ちえみ）debut single on YouTube so I decided to feature it on the blog. Things have now taken on a more poignant and sadder tone in the last several hours on hearing that Hori had just announced a battle with Stage 4 oral cancer on her own blog.


The adorable "Shiokaze no Shojo" (Sea Breeze Girl) was released in March 1982, and was written and composed by Kyoko Matsumiya（松宮恭子）with Shigeru Suzuki（鈴木茂）providing the arrangement. Despite the title, the melodic feeling isn't so much of the beach (although the strings keep things nice and breezy) but more out in the countryside with even a bit of French in there, thanks to an accordion. Also, the languid guitar reminded me a tad somewhat of Eiichi Ohtaki's（大瀧詠一） works.

I heard the report about her cancer on NHK News this morning which devoted a few minutes to the sad announcement. All I can hope is that despite the gravity of the diagnosis, Hori will be able to tackle this successfully.
Posted by J-Canuck at 2:07 PM