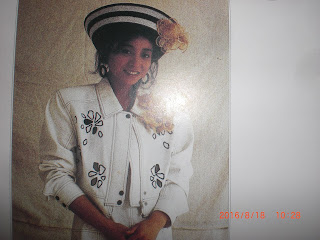 You know the saying "That was one spicy meatball!"? Well, it looks like I had one spicy chicken wing for dinner tonight which was kinda giving my gastrointestinal tract some unnecessary conniptions. Thankfully, a good amount of water and some aspirin have helped me out. Let's hope it stays that way lest I stay most of the night in another more porcelain-filled room in my home.


As such, I will also go a bit light on the music tonight and go with something soothing such as my beloved Ruiko Kurahashi（倉橋ルイ子）. She's always been the one for some of that relaxing pop from the 1980s. For example, this is "Star" from her October 1984 album "RUIKO". It's perfectly Ruiko from her soft vocals to the creamy & mellow arrangement. Y'know...I wouldn't mind witnessing another concert by her although I think the chances of that happening are probably remote at best now. So I'm grateful that I was able to catch that one nightclub performance by her during that rainy Friday night in Aoyama over a decade ago.