Misato Watanabe -- Killing Me Softly With His Song 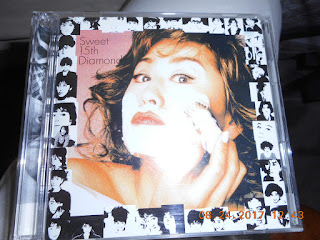 As a formerly little kid with a baby brother, one of the rituals that we had was visiting various family friends in the city. It would be a few hours of the parentals talking with the other grown-ups while we children played down in the basement. Of course, when our father came on down, we would all sigh with some melancholy since we knew that he would say that it was time to go home. It took a bit of doing but he got us out of there.

I remember being in the back seat in the car when we drove home. No matter the season, there was always the AM radio being played and one of the songs that I often heard on Toronto stations such as CKEY (which is now the Chinese-language radio station CHKT) was:


Roberta Flack's classic "Killing Me Softly With His Song" was often the radio-driven lullaby that placed me into that twilight zone between awake and asleep. I mean, imagine listening to this at night while the car was driving down the Don Valley Parkway with the highway lights flashing by at regular intervals. At the time, I couldn't quite figure out why music was trying to murder Roberta (I thought she was a perfectly decent person) but it was a soothing ballad all the same.


Well, I got the reminder of my childhood a few nights ago when I discovered this cover version by Misato Watanabe（渡辺美里）. I'd been trying to find a song by her to talk about since it had been several months since my last article on the wide-eyed songstress with the boomer voice. Happily enough, I came across this bossa nova version by Watanabe which was released under the Japanese title of "Yasashiku Utatte"（やさしく歌って）as her 40th single in February 2002. The arranger made the bossa nova part quite clear with some hints of the bossa nova ballad "The Girl From Ipanema" infused into the song.

Although I think going into the latter half of Watanabe's "Killing Me Softly", things get a little too over-produced by my estimation, she does a nice job singing the ballad in the original English. The single peaked at No. 63 on Oricon. It was also placed on the singer's first album of covers, "Cafe mocha ~ Uta no Ki ~"（うたの木...Tree of Song）which came out a month after the single. That album went as high as No. 27.

"Killing Me Softly With His Song" has apparently been covered by a number of Japanese singers over the decades including Kiyohiko Ozaki（尾崎紀世彦）and Minako Honda（本田美奈子）. However, a couple of other folks that I would love to hear give their take on what is arguably Flack's most famous song would be EPO (who is Watanabe's senpai) and Minako Yoshida（吉田美奈子）.
Posted by J-Canuck at 7:59 PM