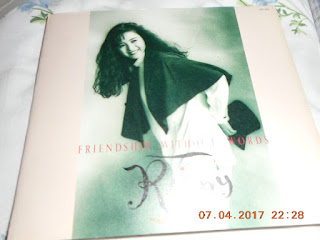 We're in the middle of a fairly lovely Family Day weekend here in Canada. It's cold out there but not bone-shiveringly so and at least the sun is also out.


It will be nice to have something appropriately relaxing here so I'm providing Reimy's（麗美）"Angel". Been a while since I've had the Okinawan singer-songwriter represented, and whenever I listen to her after a period of time, it's always a breath of fresh air.

"Angel" was created and performed by Reimy and her arrangement reminds me of those late 80s and early 90s when some really solid female singer-songwriters were coming to the fore. This was her June 1989 single when she was pursuing a softer pop/AOR line in her music, and with that guitar, the synths and her voice, there is that sensation of heaven and earth getting a little bit closer in distance. I'm not sure whether "Angel" ever got onto an original studio album but it did get placed onto her 1993 "The Best Songs of Reimy".
Posted by J-Canuck at 3:39 PM