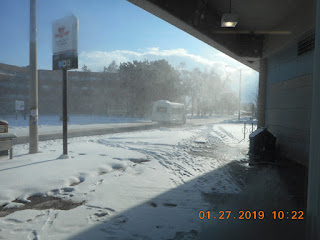 Traditionally, February is the coldest month of the year here. Certainly, it's felt like it over the past week, and being Groundhog Day today, even though our local prognosticating rodent indicated that spring will be hitting us sooner than expected, I'm kinda hard-pressed to believe it. Mind you, we've got some balmy temps coming from tomorrow; we may even hit the heady high of 10 degrees on Monday.


The first regular episode of "Uta Kon"（うたコン）was broadcast a few days ago with the theme being winter, and one of the songs featured in a montage was "Konayuki" (Powder Snow) by the rock band Remioromen（レミオロメン）. Hearing vocalist Ryota Fujimaki（藤巻亮太）, the song struck a chord of familiarity, and after looking it up on J-Wiki, I realized that it was used as an insert song in the TV drama "Ichi Liter no Namida"（１リットルの涙...One Liter of Tears）. The theme song "Only Human" was actually provided by Korean pop singer K, and there is actually a write-up on that song and the show provided by JTM.


Still living in the Tokyo area at the time, although I wasn't a fan of Remioromen, "Konayuki" was one of those numbers that was heard everywhere. Listening to it again, there is a lot about it that reminds me of some of the Japanese guitar pop/rock that I used to hear in the 1990s. The music and lyrics were created by Fujimaki, and going through the translation at "Anime Lyrics", the words seem to weave a scene or an opening credits sequence that could have been in "Ichi Liter no Namida" with the characters looking up at a snowy sky and somehow being psychically connected for a few moments. But it also hints at the bond between the main characters of Aya and Haruto across so many people, perhaps touching upon the concept of the star-crossed lovers.


"Konayuki" went Triple Platinum as it peaked at No. 2 on Oricon after its release as Remioromen's 7th single released in November 2005. At first, I was surprised that for such a popular ballad, it only ended up as the 109th-ranked single for the year, but then I saw that release date. Actually the following year, it became the 2nd-ranked single for 2006, and the band actually got their appearance on the 2009 Kohaku Utagassen to sing "Konayuki". The song also got onto their 3rd album "Horizon" from May 2006; it stayed at the top of the rankings for 3 weeks straight and became the 16th-ranked album of the year.

I was wondering how Fujimaki and his bandmates came up with the name Remioromen, and it looks like it originated from a bit of wordplay.
Posted by J-Canuck at 3:20 PM