Junko Ohashi -- Another Day, Another Love 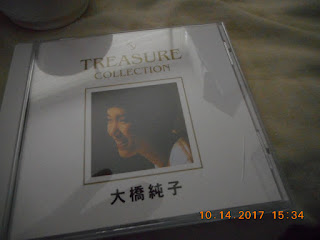 Friday night is here. Time to unwind before the weekend is upon us. Perhaps something apropos with a glass of Bailey's Irish Cream.


Och, maybe this one will do. "Another Day, Another Love" is the opening track for Junko Ohashi's（大橋純子）August 1981 album "Tea For Tears". It's an interesting mix of 70s sunny soul with 80s arrangement. Blogger kaz-shin mentioned on his "Music Avenue" review of the album that "Another Day, Another Love" was a tune to be enjoyed while positioned atop a hill with the sea breeze flowing through with the sun shining. Good enough for me. I would adjust the setting a tad, though, by making the time of day into early evening just as the sun is setting.

"Another Day, Another Love" was written by Yoshiko Miura（三浦徳子）and composed by Yoshihiko Yonekura（米倉良広）. My compliments also go out to arranger Mitsuo Hagita（萩田光雄）with the nice strings especially. I would like to hear this after completing an especially arduous translating assignment (I may end up listening to it tomorrow then). Incidentally, the song shares vinyl space with a tune that has become famous worldwide via one corner of YouTube (you just gotta remember those digits).

Anyways, I hope that Ohashi is doing well. After that diagnosis of early esophageal cancer last year, I have been worried about her health.

To finish off, this is an update on Van Paugam's radio. Last night on that Junko Mihara（三原じゅん子）article, I mentioned that the radio and even his whole channel were taken down by the powers-that-be. Well, since that time, it's been happily realized that VP is not going down without a fight. He has set up shop again on YouTube and has a more restricted version of his radio that now has opening and closing times. Basically when it's evening on the eastern part of the United States, it's closed there, but if you go to his Twitter account, you can access the radio (still riding the highways and byways of Japan) there. He's asked to spread the word that Van Paugam's still got 'em so I'm providing this paragraph.

May 22nd 2020: Hitomi Tohyama（当山ひとみ）provided her own version of the song right here.
Posted by J-Canuck at 8:15 PM