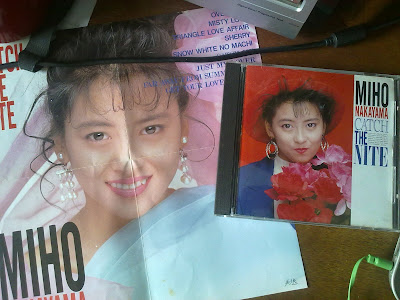 Recently, I’ve been rediscovering Miho Nakayama (中山美穂). Until a few days ago, as I owned just the comprehensive singles collection called “Perfect Best” (2010), it’s been years since I last heard her albums. Now, I was finally able to get her classic "CATCH THE NITE" album.

Miho is an interesting aidoru who in the second half of the 80s, more exactly from 1985 to 1990, released a string of successful singles and albums, ranging from pure early 80s-styled aidoru-pop to Eurobeat, R&B and City Pop. Also, besides an accomplished career as a pop aidoru, girl was surely busy around 1987~1988 shooting dramas, doing lots of concerts, promo events and even starring in a Famicom game. In my opinion, she was never the most talented singer out there, even though she surely had the cute looks and hit it big with songs like the Euro-oriented “WAKU WAKU Sasete” (WAKU WAKUさせて) or the gorgeous ballad “You’re My Only Shinin’ Star”, this one written and composed by City Pop master Toshiki Kadomatsu (角松敏生).

Speaking of Kadomatsu, he worked with Miho for the first time in 1986, during the recording sessions of her “Summer Breeze” album, to which he contributed three original songs, one of them being an early – and still very raw in Miho’s vocal delivery – version of “You’re My Only Shinin’ Star”. Then, in 1987, Kadomatsu went back in studio with her, but this time as the producer of the entire project later called “CATCH THE NITE”.

Opening the album, there’s a short instrumental piece with a heavy synth bass and a dreamy synth melody that connects right away with “MISTY LOVE”, our true proper song, and the first showcase of how Miho matured really quickly from the cute aidoru that sang harmless things like “C”, “BE-BOP-HIGHSCHOOL” and “Iro White Blend” (色・ホワイトブレンド) into a performer capable of owning Kadomatsu’s polished brand of electronic disco.

The same can be said about my personal favorite, “TRIANGLE LOVE AFFAIR”, but this time with a sassy arrangement full of horns and an equally committed Miho Nakayama on vocals. In fact, not just the horns, but the full arrangement is top notch with all the keyboard sounds and the pleasant summery percussion in the chorus. Finally, on a side note, this song is one of the two or three songs that were not directly written or composed by Kadomatsu for the “CATCH THE NITE” album, even if it still sounds like something he would do (he was the producer of the album, so he probably had a hand on it as well, or the people involved emulated very well the overall sound he was going for).

Our first slow moment of the album, “SHERRY” is a beautiful and almost hypnotic mid-tempo funk carried by Miho’s silky sexy vocals. A true standout song that I couldn’t remind until I listened to it again in the last few weeks. Shame on me!

Back to the disco floor, this time in the form of the Euro-oriented “CATCH ME”, this is the only single released prior to the album, and curiously Miho’s first single to reach the top position in the Oricon chart. In my opinion, even though far in popularity from some of the aforementioned go-to 80s hits in Nakayama’s discography, like “WAKU WAKU Sasete” and “You’re My Only Shinin’ Star”, “CATCH ME” is pretty good with how urgent and strong it sounds – a courtesy of the amazing synth work (the descending arpeggios in the chorus almost kills me every time) and the steady drum beat. Also, even though this was the first song by Miho Nakayama I’ve ever listened to almost ten years ago, it was only last week that I noticed how Kadomatsu seemed a little bit inspired by “Fascinated”, a hit song by Freestyle American girl group Company B, when composing “CATCH ME”, since both songs share a very similar chord progression at times.

“Kabin” (花瓶), my last highlight, but also the album’s final song, is a beautiful masterpiece. If this ballad wasn’t enjoyable enough per se, when we think it’s almost over, a magic piano keeps playing and Miho, backed by background singers, returns for a glorious ending with a new melody altogether. It’s a surprising feature and the kind of touch Kadomatsu surely wanted to include to elevate an already great song. Also, as in most of the album, Kadomatsu somehow made Miho sing in a somewhat soulful way here, which is something I couldn’t imagine while listening to the squeaky aidoru she was less than a year before.